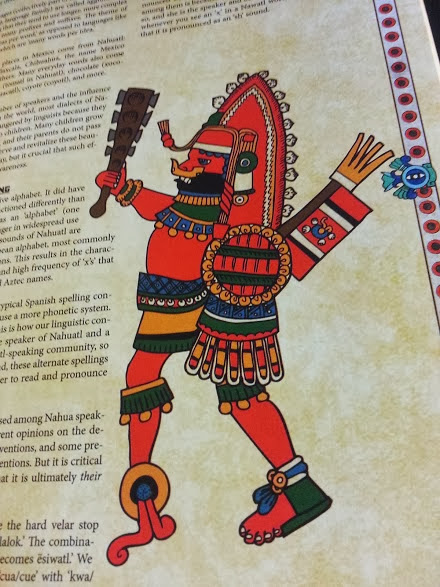 Today we started our formal read through of the New Fire RPG, a game set in a world inspired by the peoples of pre-Colombian Mesoamerica. The image above is of the fire god Oleletetl. He was one of the five gods involved in the primordial struggle against the Ur-caiman Sipaktli, a crocodilian mega monster living in the primordial chaos sea at the dawn of the world.

First the gods fought Sipaktli individually. That did not go so well.

Then, the Earth god came up with a strategy that involved teamwork. Oleletletl bravely confronted Sipaktli, and sacrificed his foot to the beast as a distraction, so that two other gods could strike the monster. This teamwork was successful. The elements can work together.

When the gods slew Sipaktli, its skin became the land covering the primordial chaos-sea, and its back spines became the world's mountains.

This is how the first land was created for people to live on.

The gods of the New Fire are recognizably Mesoamerican, but they are unique to the game. Author Jason Caminsky explained to me recently that he didn't want to use the real world deities since people continue to worship them. Jason also wanted to create his own deities and myths based upon the ones he had learned about the Aztec gods. Myth creation can be very satisfying, and I think he did a good job with this in his efforts to create an original game world that is very much in the spirit of historical Mesoamerica.

You can see the traces of the historical deities and myths in the game. For example, the historical deity Tezcatlipoca played this foot-sacrificial role in the real world version of the confrontation. He's often depicted as missing one foot, like the deity Oleletletl above.


A very mysterious jaguar-associated deity, Tezcatlipoca is also linked to some of the core mysteries of our own Xeno-Meso setting.

A Bit More On The New Fire


This is one of the numerous, lavish images in Jason Caminsky's New Fire RPG, which is set in the pre-Columbian Aztec world. My hardcover full-color copy of the game arrived today; the art is just amazing to behold. The artists really did their homework, but I suspect they also received strong, focused art direction from Mr. Caminsky.

The artistic feel of the book is quite unified. There are three types of illustration:


The three types of illustrations work together to convey how the world looks and how people saw it themselves. This is also reinforced by many small details in how the book was arranged. Each text box providing additional context on the game world is bordered on the left by a Vision Serpent, a very classy and appropriate touch that promotes immersion.

The details help one get inside the culture. I also like the fact that on page178 all the glyphs for the day signs are arranged in a column with their corresponding English name just to the left of the glyph.

More to come as I start reading the book
Posted by Tallgeese at 9:59 PM 1 comment:

Smoke From The New Fire 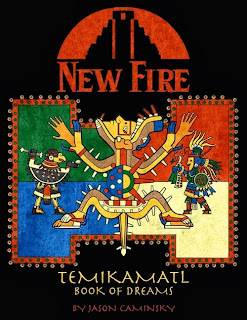 Readers who know of The Everwayan's involvement with the Heirs to the Lost World RPG, and our own Xeno-Meso setting will not be surprised to learn that we keep a vigilant eye open for other Mesoamerican-inspired RPGs.

Over the last year, we've been very intrigued by the tell-tale smoke from the New Fire, an Aztec/Mesoamerican RPG recently released and now available in PDF and different print formats through DriveThruRPG. The New Fire's PDF is simply beautiful, and we are looking forward to the arrival of our copy of the full color hardcover.

I find reading PDFs much more challenging than books, but I have been flipping around in my PDF copy while I wait for the book. This game is clearly written by someone who has learned a great deal about Mesoamerican culture and has thought through how to make an Aztec-centered game that is faithful to the source material, respectful of contemporary Nahuatl speakers, and an interesting set-up for roleplaying adventures. 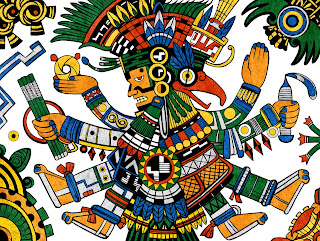 Here is the most in-depth review of the game I have found so far. If you go to the New Fire website, you can also connect to the game's Facebook page, which is the most active online community for the game. 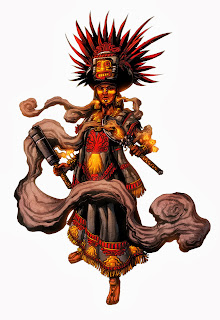 We'll have more to say once the hard copy arrives and we have a chance to digest it!
Posted by Tallgeese at 1:06 AM No comments:

Email ThisBlogThis!Share to TwitterShare to FacebookShare to Pinterest
Labels: Heirs to the Lost World, Xeno-Meso

The Shutdown: Choking To Death On A Happy Meal

My cousin choked to death on the equivalent of a Happy Meal. She died alone in her home. It took a couple of days for family members to guess that something had happened.

You see, she had advanced Parkinson's Disease, and could not cook for herself. The disease had advanced very far because it had been undiagnosed and untreated for way, way too long.

Well, the short answer is that poor people avoid doctors until they cannot avoid them. My cousin had gone to the emergency room many times, but as someone who also had advanced diabetes, lacked health insurance, and was the caregiver for her mother, regular doctor's visits just weren't happening too often.

There were many diabetes medications that she had to pay for out-of-pocket first. And a 10+ year old blood glucose meter that needed expensive test strips, purchased out of pocket. And lancets. And insulin injection equipment.

My cousin lacked insurance because she was part of the working poor. In the past she had worked full time at a very steady professional job. (More on that below.) In recent years, she had worked as best she could - part-time - for as long as she could. Until the Parkinson's made it almost impossible for her to continue teaching instrumental music to children.

Eventually, she qualified for Social Security Disability but by then it was too little health care, too late - and still no visiting nurse or home care assistance to speak of.

Imagine having to care for your home-bound mother who could barely walk, when you yourself have both diabetes and Parkinson's.

But that was my cousin's situation.

Because after 30 years of teaching children in the parochial schools of the Diocese of Rochester, she lost her job. Her entire school, along with many other Catholic schools, had to close their doors.

You see, the Diocese didn't police itself for decades. All their money ended up going into an endless series of settlements for priest child sexual abuse victims.

So no job, no pension, and no insurance.

The next time you hear about the Affordable Health Care Act, I invite you to think about people like my cousin.

She had a name: Eloise Ann Hubbel.

She lived at 541 Clay Avenue in Rochester, New York.

She mattered a lot to me.

Her death, while "accidental" in some sense, might well have been preventable if she had had health insurance and better access to health care.
Posted by Tallgeese at 5:39 PM 3 comments: