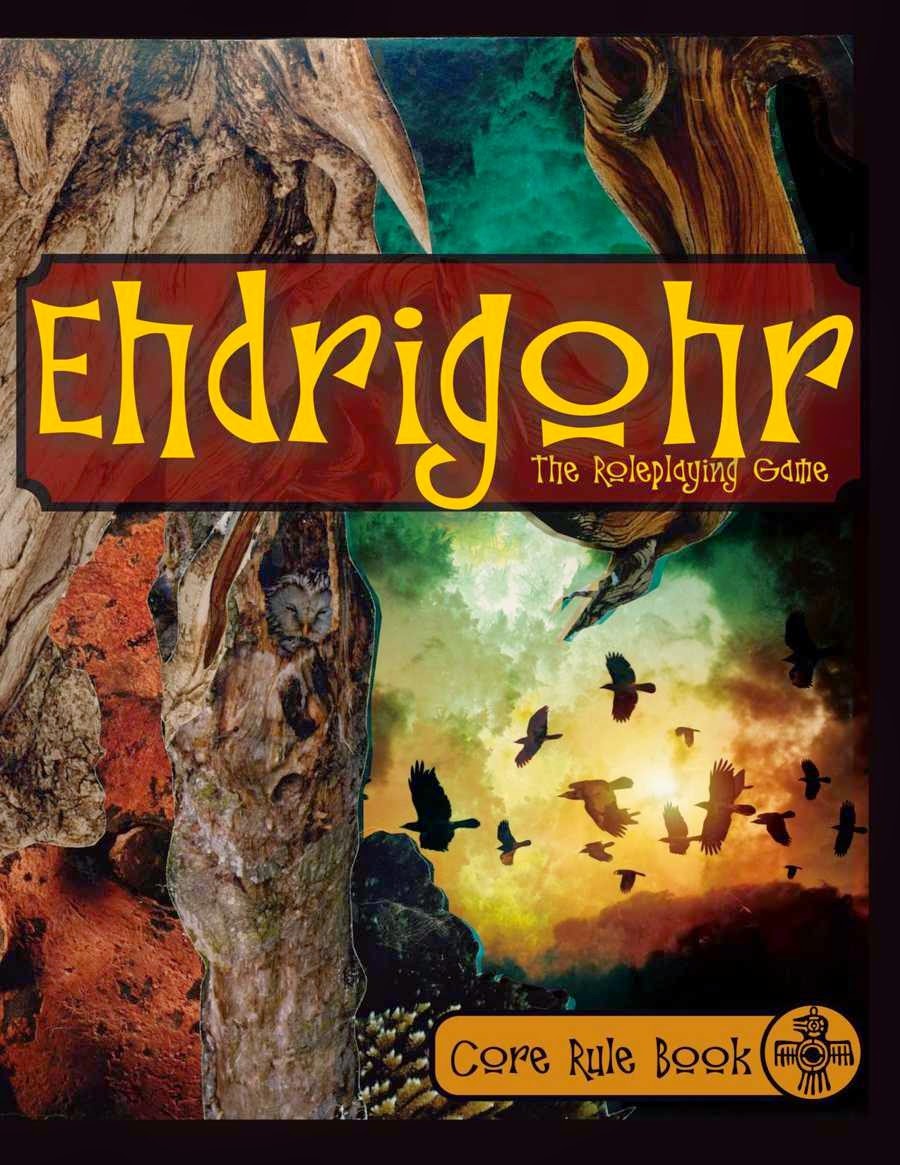 I've been reading Ehdrigohr, Allen Turner's fantasy RPG for Fate Core. I read about 130 pages of this full-sized book over the Memorial Day weekend, and about 100 pages this weekend. I still have another 100 or so to go. Today's post isn't a full review, but more of a progress report.

Many Fate fans gained access to this game through a recent Fate-themed Bundle of Holding. The game has a blog, Council of Fools, and a G+ Community. If you haven't heard of the game, you will probably want to check out one or both of those resources before pulling the trigger on a purchase. The author didn't market the game very intensely with the Fate community, so it is less well known than other early offerings for Fate Core such as ADX and Jadepunk. My impression is that the author saw Fate as a vehicle for portraying his world, rather than Fate as a game system that needed new worlds to explore.

And quite a world Ehdrigohr is!

Author Allen Turner has created a multicultural world that is presented from a Lakota cultural standpoint. So this is a game set on a past or future Turtle Island, and the general metaphysics of the world are based on the Four Directions or Medicine Wheel. While not all native peoples of the Americas use the Medicine Wheel concept, it's cultural currency is widespread in North America. It's a model for the universe, for the cycle of life, the social world,  spirituality, science, and an understanding of physical and mental health. It's also a zone for physical and spiritual conflicts, and plays many of these different roles simultaneously in Ehdrigohr.

At the center of the world are peoples like the Lakota and Ojibway. To the East are people of the Longhouse. To the South East are mound building city-dwellers. In the oceans to the Southeast are Aztec-influenced folk who build their cities on the backs of sea monsters. To the far South, across a narrow sea, are Bedouin-like peoples as well as a city-dwelling Empire of artificers. To the far West are people who live in a vast marsh on the backs of giant turtles, and folks who live as island cliff dwellers. There are also northern peoples who live in the ice and cold.

This creates a bit of a cultural melange. It may not appeal to people who want a historically purist or very unified cultural vision. For instance, the New Fire RPG has a much more narrow focus on the cultures of Mesoamerica and appears much more unified and less of a gathering of scattered influences as a result. Similarly, Heirs to the Lost World RPG deals with significant cultural diversity but in a narrower geographic space than Ehdrigohr (and also as an alternate history game is a very recognizable 17th C. Mesoamerican and Caribbean setting). Nevertheless, Ehdrigohr is, like the other games above, a labor of love devoted to something of deep personal and cultural importance to the author. It is likely to appeal to the sorts of gamers who want something different than traditional fantasy.

Just as importantly, this isn't the erasure of Gene Wolfe's Urth of the New Sun either, where the peoples north of Patagonia are basically faceless monstrous communististic adversaries. The cultures of Ehdrigohr feel real-enough, tribe like groupings that could share some cultural commonalities as well as have significant differences from each other that make the individual cultures distinct. Along these lines, the juxtaposition of recognizably North American native peoples with Bedouin-type tribal peoples isn't that jarring to me. In fact, right here in Minneapolis, Somali and Native American people have been meeting together to promote intercultural and intergenerational peacemaking. They are discovering many commonalities they share as tribe and clan based peoples.


The setting is shared through both stories and exposition. The stories - often myths - are very good. The setting exposition and rules, however, are very poorly edited. The book has grammatical errors on almost every page with the exception of the stories. It really could have used a few more editorial passes. (I also have some reservations about the implementation of Fate Core here, although I think there's a playable game here.) Yet the vision of the world of Ehdrigohr is worth the reading. Like Tekumel or Everway, it borrows from real world non-European cultures, and does something new with them. I could see running this with my gaming group. Hell, you could probably run something like Fate Everway with it right out of the box!

We'll have a full review up on FATE SF when we have read the entire book.
Posted by Tallgeese at 2:57 PM