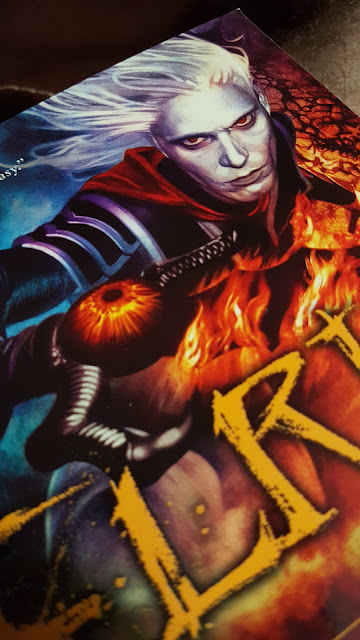 The Second Foundation Reading Group will be taking on the work of Michael Moorcock, especially the Elric and other Eternal Champion stories, for its meeting on Sunday, September 11, 2-4 PM at Parkway Pizza on Minnehaha Avenue in Minneapolis. People who are interested in Moorcock are most welcome to attend!

I am currently reading the first volume of the recent Del Rey Elric series: Elric: The Stealer of Souls, Chronicles of the Last Emperor of Melnibone, Volume I. This volume contains two fixup novels, The Stealer of Souls and Stormbringer. Judging from the first volume, the Del Rey series appears to be structured primarily in the order in which the Elric novels were originally published. In other words, some of the "later" episodes in the life of Elric of Melnibone were published first.

The collections also feature art from various Elric publications, maps of the Young Kingdoms, various essays by Moorcock and others on Elric, the Eternal Champions, and Moorcockian fantasy, as well as samples of related or not-so-related works and inspirations for Elric (such as the Sexton Blake pulp detective series). I remember being really irritated by the Del Rey volumes' "jumbled" order of Elric stories-cum-Moorcockiana. But essays like the evocative opener by Alan Moore, which reveals the plot homologies between The Stealer of Souls and the first Jerry Cornelius novel, are adding to my appreciation of the texts as I encounter them again.

Each volume also contains new art by a featured artist. Volume I's featured artist is John Picacio, whose work strikes me as somewhat vacant; the cover at least is vibrant, I suppose.

I hope to finish The Stealer of Souls in the next couple of days and then begin rereading Stormbringer.  The stories are great to come back to again; I haven't read them since the '70s. The Elric stories are more literary than I remembered. Not bad at all.
Posted by Tallgeese at 9:15 PM