Minnesota has transitioned to #StaySafeMN, which shifts the burden of responsibility for protecting citizen's health and safety from the state, back to individuals, with all of their individual variations in risk tolerance, carelessness, and community mindedness.

We're mainly still in #StayAtHome mode in this household, and I applaud Minneapolis Mayor Jacob Frey's executive order requiring masks in all indoor public venues including stores, schools, and government facilities. The only issue is that his order includes all children above age two. I wonder if the Mayor talked to any early childhood advocates, or to MDH or to MN DHS before making this decree? It goes against MDH and MN DHS recommendations to require very young children, for example in childcare settings, to wear masks. Not to mention the relative unavailability of such masks, and the lack of adequate notice.

At any rate, what I have read since my last post is detailed just below: 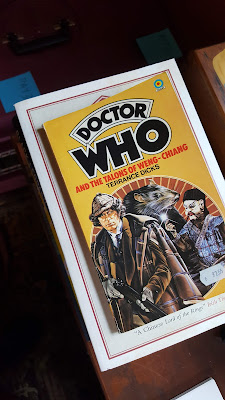 Doctor Who and the Talons of Weng-Chiang is just as Orientalist and racist as you remember, if you watched the Fourth Doctor episodes. The book does have some good characters though, and some interesting worldbuilding in the form of future Earth "Time Cabinets" that are very dangerous to the users, indeed. 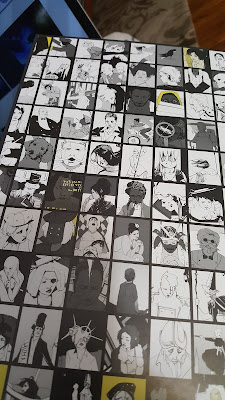 Last week, I made my first character for the Electric Bastionland RPG, which took about 5 minutes. I like the Failed Career mechanics, which differentiate characters by the connections and equipment they acquired in the career they most recently exited - their exit due to an urgent need to reduce their debts. The debt source and amount listed for the youngest player becomes the source of obligation for the entire PC group, giving the players a built in reason to adventure together. Each Failed Career gets a two-page spread. There are 100 Failed Careers (more than you can roll on the character generation table), so plenty to choose from, and for the GM to also generate NPC adversaries. I am prepping an Electric Bastionland game as a Plan B game for our regular Thursday night group. This rules light game should be perfect for online play. 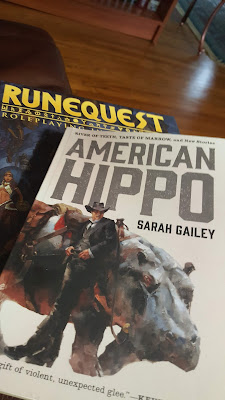 Sarah Gailey's American Hippo brings together two of her alternate history novellas and a couple short stories set in the 19th C. Mississippi Delta (with both ride-able and feral hippos!). The book has great LGBTQ characters, and one hell of a civil engineering setting error: one you could drive a steamship through. The error ruined my immersion in the story. I am not sure why the editor did not send the author back to the drawing board to fix this issue. Perhaps TOR doesn't think science consistently across its SF brands? Technically this is science fiction, and the book fails in the department of plausible science (we can't even say plausible extrapolation, because the engineering/science that the author screwed up has been understood for thousands of years). 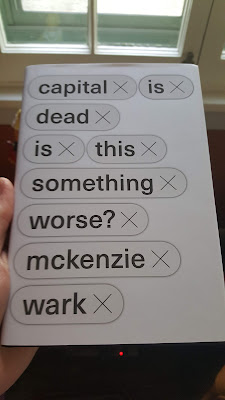 McKenzie Wark's Capital is Dead is a great read, particularly the bits about the "social relations of science" Marxist school in the early postwar UK. Wark makes the case that the dominant mode of production is no longer capitalist, but vectoralist. What is a vectoralism? The term refers to the elements of the economy in which the dominant activity is the production of knowledge (such as the commodifiable information produced in fun, app-based quizzes people take on Facebook) and on other information flows and logistics organized to produce value (i.e., Amazon, Walmart). The vectoralists dominate the world economy and are therefore the dominant mode of production. We are longer "in" capitalism, but in case you didn't feel the change, the various capitalist elements of the economy still exist but are now subsumed under vectoralism. (Insert modes of production debates but now with vectoralists replacing capitalists. and capitalists as the new peasants or small producers. Hmm, maybe it is the same capitalist system, after all?)

The book is presented as a critique of the dominant perspective on the left, which tends to see capitalism as eternal and unchanging. And even conceptually insurmountable, as in modes of production with labels such as "post-capitalist". Wark's critique is certainly fresh and has some validity, but isn't supported by any of the kind of empirical data that serious political economists use. It is materialist, but theoretical.

Wark's approach is also limited by the fact that they seem to assume (something they have in common with orthodox Marxists) that "capitalism" is only about 200 years old, and that it was birthed with the factory. World-systems analysis isn't addressed at all in Wark's argument, which gives it a lot in common with Mike Davis' Old Gods, New Enigmas, a very traditional look at the Socialist/Marxist tradition in the 19th and early 20th century. Davis' work has a very long and rather inspiring first chapter on the socialist tradition and the building blocks of socialist agency, followed by a lackluster chapter on the "problem" of nationalism (without considering other identity categories), a rather interesting chapter on Kropotkin and 19th C. dissident thinking on rapid climate change, and a final, and again somewhat lackluster chapter on the climate crisis - overall a less than satisfying read. 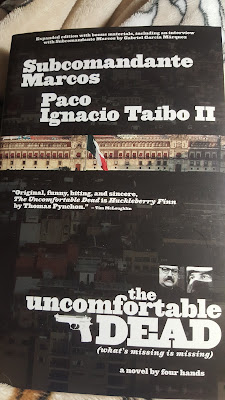 The Uncomfortable Dead by Subcomandante Marcos and Paco Ignacio Taibo II is the second work I have read by Taibo. Subcomandante Marcos and Taibo took turns writing alternating chapters, each with a different viewpoint character: in Marcos' case, a rural, crafty peasant/working class Zapatista cadre, and in Taibo's case, a Mexico city detective that he uses as a protagonist in many different detective novels. This is a surreal story of detection - Marcos' character is already dead, but somehow present and real to everyone he meets - and like Taibo's novel Calling All Heroes, this one also deals with the aftermath of the Tlatelolco Massacre of 1968, and of the rise of ultraright movements and conspiracies since that terrible event. It was a great book, and inspired me to order Taibo's huge biography of Che Guevara, titled Guevara, Also Known As Che. 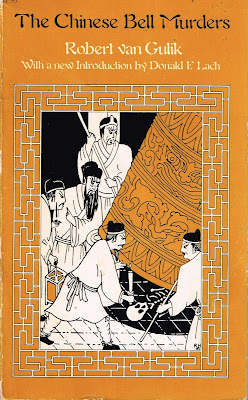 Oh, and I also finished The Chinese Bell Murders, a Judge Dee novel by Robert van Gulik. I had stalled out on finishing this a year ago (at least), after binge buying numerous books in the series. While van Gulik makes some intentional use of anachronism in his Judge Dee novels (a Tang dynasty hero and setting, with some Ming dynasty borrowings in the material culture and customs) these are a great resource for people considering GMing games set in classical China.

I last read this novel for a senior level anthropology/history class on China; that was 37 years ago. Upon rereading the book, I was struck by how much of the martial arts elements I had missed. Plus the maps are just great. Many of the books in the series start with a keyed map of the Chinese city in which Judge Dee happens to be assigned at that moment; you could easily steal these maps to build a campaign setting. I'll be reading more books in the series in the coming months.
Posted by Tallgeese at 1:47 PM