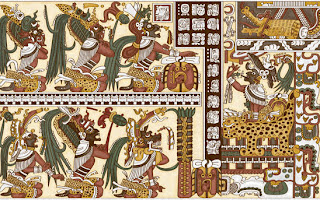 Although the Sphere of Xeno-Meso is very far away from Everway, The Paddlers are not the only Everwayans to have visited the Sixth World. According to the scroll-book Things Seen In the Obsidian Mirror by Lightning Diviner Crookstaff  (and from the title we assume you can guess the name of the book's author), seven other Everwayans have visited that Sphere.

Apparently, none of them returned.

Instead, the scroll-book tells us they became Petty Gods among the peoples of the Sixth World.

Mr. Lightining Diviner Crookstaff's cursive is quite crabbed, and consequently his scroll-book rather difficult to read. But we are slowly making progress with the text.

In time, the Strangerside Scholar will have more to say about these unfortunates.
Posted by Tallgeese at 7:00 AM