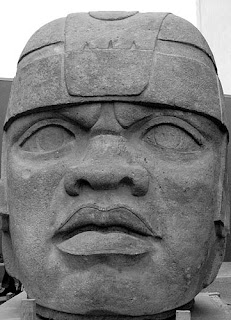 The black-skinned Olmeca rule the lands southeast of great city of Xochiquetzatlan, and collect tribute from many towns and villages from Xochiquetzatlan in the northwest well down into the small tribal villages of the Ithmus between the two great oceans. The Olmeca arrived from over the eastern ocean in great ships carrying hundreds of warriors. Armed with iron-tipped spears and swords, their warriors were unstoppable. The native defenders had little chance against these weapons, let alone against the fearsome new spells of Olmeca's terrible masked magicians, priests, and griots.

The Olmeca established their own great state, took native women as their wives, made slaves of their weak and newly conquered foes, and built new towns, cities, palaces, and temples on top of the old. These days, the Olmeca empire is not so much expansionist as extortionist. The Olmeca demand that the lords of Xochiquetzatlan and the surrounding lands hand over tribute in order to avoid wholesale death, enslavement, or even worse - ensorcellment - at their hands. No one wants to be come a spell-slave in one of the Olmeca's masked sorcerer-societies.

All the great Maya folk of the peninsula used to pay tribute to the Olmeca, until their new allies, The Paddlers, arrived through the sea gate. The Maya communities closest to the Olmeca homeland continue to pay their full tribute, while the Mayan towns and city-states further south and east now make only symbolic tributes. This has heightened resource conflicts among the Olmeca elites, and many fear that war - either civil war or war with the more independent Maya states is inevitable.

The Olmeca have been in the Sixth World for several generations. The blood of their leaders has not grown too diluted, because their priests carefully arrange and approve all marriages in order to concentrate the ancestors' blood in each successive new generation. Increasingly, the sons of the great chieftains of the Olmeca are wed to conjure wives, witch-women who arrive in their palaces unnoticed and unheard during the deepest, darkest hours on moonless nights. Many a young prince awakens and finds himself in the embrace of these fearsome and beautiful brides.

Olmeca religion is a complex matter. The temple of Ogun remains their supreme warrior cult, but the Olmeca also worship other gods they brought with them across the ocean, as well as their ancestors, and many of the gods of the native peoples of the Sixth World. Temples and cultic spaces of all kinds proliferate in Olmeca cities, their cults and mythologies combining and recombining in bewildering ways.

Cults, warrior societies, and priests engage in deadly contests for power and prestige in Olmeca cities and towns. Religious riots often erupt, fueled by sorcerers and cultists. Many in their villages and palaces alike mutter rumors about impending religious and civil war. Whether the Olmeca king can hold all these factions together for much longer is uncertain.
Posted by Tallgeese at 1:05 PM

Email ThisBlogThis!Share to TwitterShare to FacebookShare to Pinterest
Labels: The Legend of the Whiteoars, Xeno-Meso