On Saturday, I had the opportunity to experience one of the gaming traditions which led to the roleplaying hobby: "Braunsteins" are large-scale, multi-player and multi-faction miniatures events featuring both armed units as well as name or signature characters. Each faction has its own victory conditions. Roleplaying and parley are possible. I can see how roleplaying evolved out of this tradition.

You can consult +Jon Peterson's Playing at the World for more on this gaming tradition and its contribution to roleplaying. Jon's book has become the definitive book on the origins of roleplaying. This is also a good reference.

You should also check out Jeff Berry's blog for more on the event itself, including video of the event, which you can also access directly from here.

The scenario was called "Saving Serqu's Sisters". The sisters had gotten marooned in a wet archipelago, and apparently needed rescuing. They had a reputation for being ditzy, but that was somewhat given the lie quite early in the game. One of them used one shot from an Eye of Raging Power to disable a ship full of Ahoggya mercenaries. It wasn't pretty.

I was part of the Hlutrgu faction, and the character that I personally ran (for the most part) was a Hlutrgu fire shaman. Imagine Karel Capek's "newts" with a very bad attitude, and a taste for "long pig" and you get the idea of Hlutrgu. What can I say, Professor Barker borrowed ideas from only the best authors in the early days of SF.


Our turf. Our surf.

Here is the first ship our shaman fired: 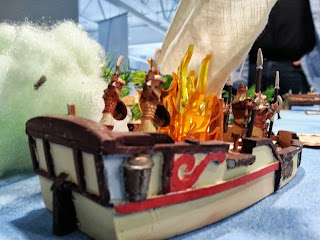 That was a small one. Later on, we did the same with a much larger vessel.

I accidentally uncovered a Feshenga (not bright), but we actually got to kill it with on Hlutrgu's well-placed spear:

Killing a Feshenga with one spear blow is next to impossible. They are formidable semi-intelligent creatures. In another recent campaign, we ran away from one. That is always a sensible course of action.

It was a lucky roll.

Jeff adjudicated the game using the set of rules he wrote with M.A.R. Barker: 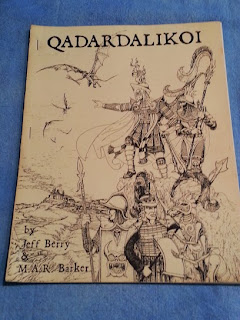 Jeff also supplied all the miniatures, props, and materials. It was a wonderful scene he created! The experience has been making me think about the limitations of most contemporary indie rulesets, which tend to eschew miniatures and props.But these visual elements CAN be used build story and drive a narrative, especially when you use them as well as Jeff used them here. 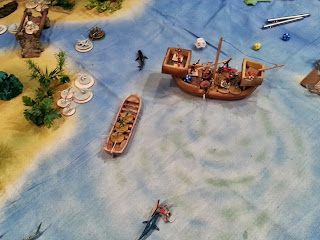 By my count there were about 20 players and visitors during the course of the day.

All I can say was it was a lot of fun.

Thanks to Jeff Berry for organizing this, and to Fantasy Flight Games for hosting us on their wonderful mezzanine.

All photos are copyright 2013 John Everett Till.
Posted by Tallgeese at 6:57 AM