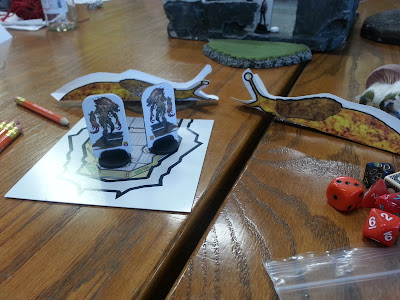 I ran two games for Free RPG Day. The first was "Slugfest," using Lamentations of the Flame Princess. This was my first time running Lamentations, which is a pretty crisp little retroclone. The PCs were members of La Compania, a private mercenary company in the pay of the Viceroy of New Spain.

I was pretty proud of the PCs that I created for the game (eight created, five used), which included one based on Lance Hendrickson's "Bishop", another based on the notorious historical figure Malinche (didn't get played), and another a member of the von Bek family (I often have a von Bek or another of the Moorcockian-Hal Duncanian lines of Champions in my games).

They PCs entered a Smoking Mirror Engine beneath an ancient shrine to an ur-Lord Tezcatlipoca in the long-abandoned city of Teotihuacan, and proceeded though a series of Engine gate links to alien worlds. First they were surprised coming out of a gate by Octovoidal Transvectors, and later had an encounter with some Achernarians investigating a crashed starship module.

The mood shifted from grim SF to goofy Slugfest shortly thereafter. The slug minis up above are Garganta-Slugs from the Hereticwerks blog, as were the Octovoidal Transvectors and the Achernarians, who have been recurrent characters in a number of my Fate, Dr Who, and old school SF games.

The Slugs sourcebook for Free RPG Day has great illustration (with typical, not-for-children LoTFP flourishes). But I don't really see the "gaming revolution" promised in its introduction and the re-release hype. There's a difference between revolution and revolt, which is why both punk and metal were ultimately dead ends, but persist as simulacra. I'll leave it there.
Posted by Tallgeese at 12:36 PM