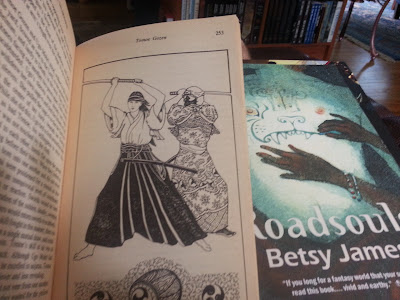 I am not sure whether it was Lee Gold's Land of the Rising Sun RPG, or Jessica Amanda Salmonson's novel Tomoe Gozen where I first learned of the rapid draw-strike-sheathe sword art of iaijutsu, but the novel ends with a moving dueling scene as ably depicted above by Wendy Adrian Shultz. (I love her illustration, and I believe she also illustrated Phyllis Ann Karr's Wildwraith's Last Battle).

It's a moving scene - particularly the aftermath of the duel.

Prior to the Epilog, which is where the duel occurs, the third part of the book deals with a mishap at sea, and adventures on a mysterious island. There is a memorable sex scene (among many other things). So I am not sure how I had forgotten this part of the book entirely.

You see, in our recent Ryuutama RPG games, I had created a setting called The Sinking Lands, which served as an alternate setting which allowed Rachel to play from time-to-time rather than GM. I had thought that this setting was more influenced (if anything) by the swampy landscape in C.J. Cherryh's Gate of Ivrel but now that I have re-read the third part of Tomoe Gozen, I notice a couple of supernatural similarities (for clues, seek the Labels to this post).

There's no failed marriage though.

Posted by Tallgeese at 3:13 PM