I just finished running a two session game of Troika. It was a lot of fun, especially the second session, when I got a better sense of how to handle NPCs. Small differences in Skill level can be quite significant in combat.

Character generation is quick. There are three stats: (general) Skill, Stamina (which functions as hit points), and Luck (which decrements). There are also Advanced (i.e., specific) Skills and Spells, which function similarly to Skills in terms of  dice rolls.

The game uses a 2D6 die roll mechanic. You try to roll equal to or under the sum of your Skill + Advanced Skill (or Spell) when you are not in combat or direct competition with someone else. During combat and competition, Skills (and targeted Spells) are successful when you roll higher than your opponent.  Casting reduces Stamina, as does damage from weapons, which can also be quite variable.

The system has two killer apps. One is character generation. After generating your three core stats, you roll a D66 (i.e., two D6's, with the first die representing the 10-60, and the second die representing 1-6). The number you roll specifies your character Background, which can be anything from Cacogen (a "hideous" alien, a la Gene Wolfe's Shadow of the Torturer series), to a Chaos Champion, to a Gremlin Catcher, to a Golden Barge Pilot (think baroque 40K starships, or the starships with solar sails in Wolfe's Urth of the New Sun) - and many other Backgrounds.

The Backgrounds are evocative, and help define and give directionality to the setting and the activities of the player characters. As well as the evocative descriptions, Backgrounds also provide Advanced Skills and possessions/equipment. For instance, the Gremlin Catcher gets a "small but vicious dog".


The other killer app is the game's unique approach to initiative. Each PC puts two dice of the same color in the GM's dice bag. (You need a pair of D6's of a unique color for each PC at the table.) Each NPC has an Initiative score, and the GM puts that many dice in the bag to represent each NPC. Initiative is determined by pulling dice from the bag. One additional die of a unique color is also placed in the bag as a turn-end counter. If your die is pulled, you have initiative. Most rolls are contested, and if the defender has the higher roll, then the "defender" can deal damage, even when they don't have initiative. A round ends as soon as the turn-end counter is pulled, which can happen at any time. The initiative system is therefore quite unpredictable, since adversaries (or PCs) may keep initiative for a few successive die pulls , and a round may end at any time with a pull of the turn-end die.

In tonight's two-hour session, players encountered and healed a fungal space-narwhal that had been wounded by an adamantine space-harpoon; the Chaos Champion faced off against a Mind Sloth inside a secret Chaos shrine hidden within a golden barge - shown here using a paper miniature created by Evlyn Moreau:


And, the Golden Barge Pilot faced off against a fearsome Mumbling Bird who was trying to steal the dead-captain's portolan; the creature is shown below: 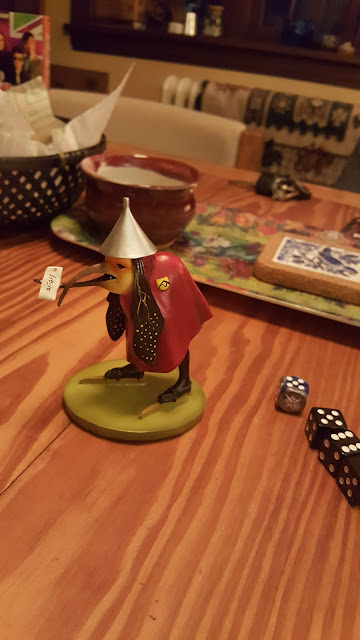 This was a really fun, trippy game!  I look forward to running Troika again at a convention or at our game table in the near future. Be sure to check out the Troika Kickstarter if this kind of old-new weird sounds like your cuppa java!
Posted by Tallgeese at 10:28 PM