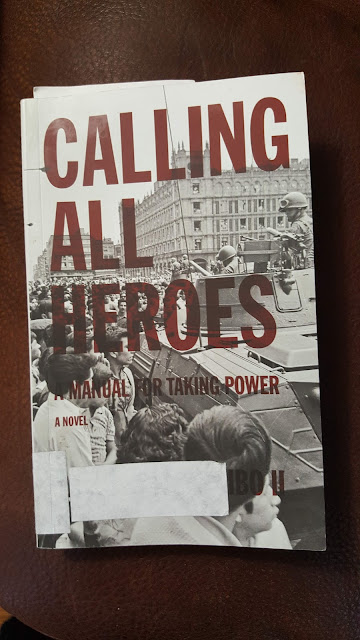 Over the weekend, I read Paco Ignacio Taibo II's Calling All Heroes: A Manual for Taking Power. Taibo is well-known for a series of novels about a Mexican detective, as well as for a biographical novel about Che. This novella clocks in at less than 120 pages, and tells the story of a former activist and current journalist who is in the hospital recovering from a stab wound. The protagonist, Nestor (and no doubt the author) are also dealing with an even deeper wound, the Tlatelolco Massacre of several hundred Mexican students protesting the Mexico City Olympics of 1968.

Nestor writes a series of missives to beloved pulp heroes of the past, and summons them to overthrow the Diaz Ordaz regime. Nestor is successful (at least he thinks so), and in the process introduces us to some familiar literary heroes (Sherlock Homes, Doc Holliday and Wyatt Earp, Winnetou and Old Shatterhand, and to some less known ones, such as Emilio Salgari's Sandokan, the "Tiger of Malaysia."

I want to read more by Taibo. I have his Che novel in the basement, as well as the novel he co-authored in alternating chapters with Subcommandante Marcos (one wonders if the "Sub" is a fan of the Romulans; he must be). Next up is Primo Levi's The Auschwitz Report, but we'll be coming back to Taibo.
Posted by Tallgeese at 6:25 PM

Email ThisBlogThis!Share to TwitterShare to FacebookShare to Pinterest
Labels: Library of All Worlds