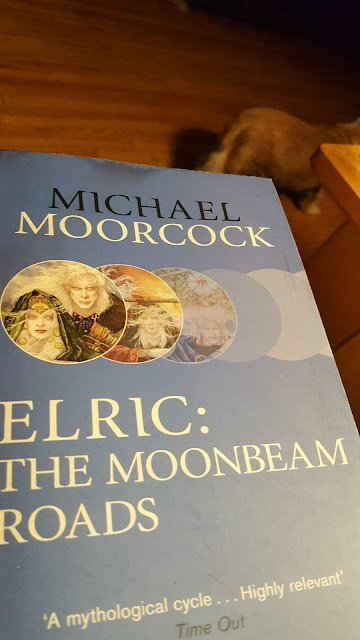 This weekend, I finished the third of the later Elric novels, Daughter of Dreams (2001), published in the  U.S. as the Dreamthief's Daughter. I took turns reading the novel in the bulky-but-lovely Gollancz omnibus, The Moonbeam Roads, shown above, as well as in a U.S. paperback edition with a cover by Robert Gould. Part of that cover is shown in the leftmost of the three miniatures up above.

The primary point of view character is Ulric von Bek, and as the story opens, Hitler is consolidating power in Germany. The novel may have reflected the times in which it was published (the early years of Bush's post-9/11 power grab), but it certainly felt relevant to the swift decline our democracy is experiencing in the Trump era. We no longer have to read fiction to imagine tyranny or how to oppose it.

The von Bek family of Germany have been the custodians of the Grail since the Thirty Year's War, when Ulric's ancient namesake encountered Lucifer and the Grail. The Nazi's want the Grail, but that isn't the sole reason they appear at von Bek's castle: their initial demand is for a black sword of great mythic resonance, Ravenbrand, another heirloom of the von Bek family.

Ravenbrand is indeed a sister-sword of Elric's Stormbringer, and soon enough Oona, the daughter of Oone (the Dreamthief from The Fortress of the Pearl) and Elric arrives, and later Elric himself. Jerry Cornelius makes an appearance, as does Oswald Bastable. Quite a chunk of the novel takes place in the bizarre cave-world of Mittelmarch. Later, there are even Melnibonean dragons, and it turns out these played a role in the Battle of Britain!

It's an extraordinarily good novel, combining historical fiction and fantasy, the myth of the Eternal Champion and the madness of Nazism. The novel will be less rewarding for readers seeking adventures in the Young Kingdoms, but it isn't far from here to something like Inglourious Basterds.

And then there's the Runestaff...

Posted by Tallgeese at 7:32 PM