#StayAtHome: Michael Moorcock's The Fortress of the Pearl 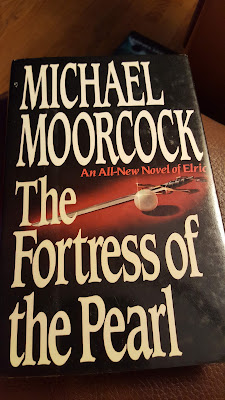 "An All-New Novel of Elric" is the comic book-like subtitle for Michael Moorcock's The Fortress of the Pearl (1989). This was the first Elric novel after the original series of books that culminates (in Elric's lifeline) with Stormbringer. It is set earlier in Elric's wanderings around the Young Kingdoms, with his cousin Yyrkoon sitting on the Ruby Throne as regent while Elric learns about the world outside Melnibone.

Which makes it a rather intriguing mirror image of Melnibone, in some ways.

This will give you a clue what happens to the city.

Elric spends most of the novel on a quest in a layered "Dreamlands" of sorts. He discovers a new magical discipline, that of the Dreamthieves. Elric seeks to free himself of an addiction he acquired through Quarzhasaati treachery, but even more to free a boy from physical captivity in Quarzhasaat, and a girl from spiritual captivity within the titular Fortress of the Pearl.

Posted by Tallgeese at 6:30 PM