A Fish Dinner in Strangerside

In tonight's second session of our new Everway campaign, Bob was able to join us, and introduce his new character, the spherewalking musician "Tom". During the questions phase, I asked: "Is he Tom like a tomcat, like Tom Bombadil, or like a tomtom?  Bob answered "I think like a tomcat, because he can find food in garbage and sleep wherever." He has the ability to summon musical instruments (but can't control which ones come) and has a 3 in Star River Magic, with the constellations Pisces, Gemini, Aquarius (I think). (Another player, Eric also modeled his more powerful Fire-inflected mage on Star River Magic, using Ares, Leo, and Capricorn. So we'll see how this new magic system works!)

Tom emerged from the Emeraldcloak Forest, after exiting the gate from Granite, close on the heels of a rather noisy party tromping southwards through the forest toward the western bridge over the Susnset River. The party was bearing a golden palanquin and escorted by soldiers. Tom hails from another Sphere, so he didn't the soldiers' livery as rustic Emerald family, but Pahoeho Sun, who is a native Everwayn (sort of did).

Here is the unpleasant and bossy chief soldier:

On the bridge, waiting for a river barge to Everway, are Percy, Osbert, and Pahoeho. A barge appears, but not from further upriver. This one is huge, and being rowed upriver by banks of oars. It must have come up river from Everway. The barge has a solid gold exterior, and all sorts of outlandish Outsiders and Strangers on deck - along with a few Everwayans.

Pahoeho has never seen a barge like this in Everway: not even a royal barge belonging to King Horizon Emerald. The barge has three tiers above the main deck. There is a party going on with powders, smokables, drink and food on the enormous aft deck. The forest party boards the deck and the palanquin and all the soldiers go below deck. They aren't seen again until the barge reaches the city some three hours later.

Pahoeho jumps on board and is welcomed. He joins the party. Tom goes aboard and offers to perform some music. He is escorted to the pilot station on the top tier of the barge, and summons an instrument: something percussive, like a sistrum. He performs.

Osbert boards and Percy grudgingly boards. Percy doesn't like the pretentious, social climber types he sees on this barge.

The barge docks at the Mercy bridge and the passengers disembark on the Everyway Proper side of the river. Pahoeho hears the phase "The Year King" used a couple of times during the river journey, and learns from one of the party goers, a unlikely priest of Osiris named Bright Mask, that while Pahoeho was off in Fire's Wall, King Horizon Emerald passed beyond and been put back upon the Wheel of Karma. The other likely Emerald heirs who might contend for the throne are all off among the spheres at the moment, so the Council invoked an ancient law (?) / ritual (?) from Everway's distant past.

Bright Mask embellishes the age of the ancient law:

Before the Emerald ruled Everway

Before Whiteoars clashed and contended

May their name be cursed and forgotten forever.

The party decides to head over to Strangerside - the really interesting half of these twin cities. Pahoeho observes that Strangerside is even more packed than ever. Every possible quality of dwelling can be found here, from prosperous estates to shanties all the way down into the mud on the southern bank of the Sunset River.

They enter a marketplace and find a place serving fresh fish and turtles. (The PCs did not engage with the far travelling Fourth Doctor, as seen on the upper left. Also, the character in blue and white with the turtle is one of my favorite Everway images!) 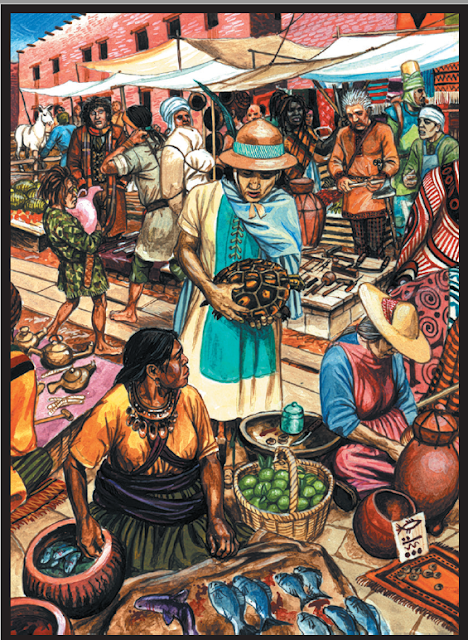 They sit down to eat fish, and Pahoehoe recommends consuming some of the raw ones that are potentially poisonous. Most of the party order raw. The Fortune Deck pull is favorable: the Priestess, Understanding Mysteries. Percy, hailing from a rules-bound realm as he does, orders something cooked: a fish sandwich. It's still potentially poisonous, so I drew a Fortune Card for him as well.

His draw: the Usurper.

The fish head animates. Percy sees a ghost fish. So does Tom. Percy doesn't react; Tom uses Star River Magic to call the ghost fish to him. The ghost fish swims over and begins making utterances. It chants the names of several Year Kings from over a thousand years ago. It intimates that the blood of ancient Year Kings still soaks the platform at the top of the Walker's Pyramid. Percy banishes the ghost fish, which disappears with a *PLOP*.

There is some discussion with Pahoeho of the Walker's Pyramid. Are there people there? Lots. There is the Pyramid Cult, a mystery sect of Outsiders, Strangers and some native Everwayans (but not typically priests of the Moondance family).  Pilgrims come to the Walker's Pyramid from hundreds of spheres. There are numerous booths where hucksters and cultists alike sell votive bricks with images from the Fortune Deck, astrological symbols, or other symbols of the god or pf the Ineffable and the Mysterious. You can buy figurines of the Walker, and effigies and amulets of the Walker's Pyramid.

Dusk is approaching and Percy wants to get settled somewhere unassuming and quiet, while Tom wants to make sure they hole up in an inn that has an "open mike" stage for performances. Pahoeho recommends The Salt Mill, a place which Osbert soon notes is near Avenue the First.

Email ThisBlogThis!Share to TwitterShare to FacebookShare to Pinterest
Labels: Campaigns, Everway, Mask, The Legend of the Whiteoars, The Walker, The Walker's Pyramid