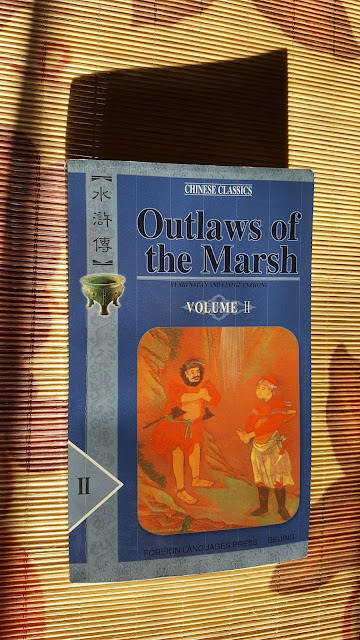 In the second volume of Outlaws of the Marsh, things really come together for the outlaws and rebels of Mt. Liang. This volume represents the stage that revolutionary Marxists might call "the accumulation of forces". The outlaws' forces multiply, drawing on rebels and bandits from other mountain strongholds, as well as from contingents of officials who have been wronged for the honorable discharge of their duties. Song Jiang the Timely Rain, the just legal clerk, gains a leadership role among the rebels, and there are major incursions against an imperial city to prevent Song Jiang from being executed, and against a town on the other side of the river where a corrupt "side-clinger" (to borrow a term from the Hwarhath Stories of Eleanor Arnason) had set Song Jiang up for arrest.

How and why did Song Jiang get arrested? While doing time in the imperial town, he went to a riverside inn with a great river view balcony and private drinking room and got really drunk. (Protip: if you are in a local jail, it pays to spread inducements broadly among the guards and the warden. Make friends, and you will be able to leave the jail whenever you want and enjoy what towns have to offer.)

Drunk Song Jiang notices all the poetry that the inn's patrons have written on the room's walls. Much of the poetry is not-too-good, and Song Jiang knows he can write better. He is also somewhat depressed and angry to be stuck in this town. So he writes his own poem on the wall:

Since childhood I studied classics and history,

And grew up shrewd and intelligent.

Today, a tiger enduring in the wilderness,

I crouch with tooth and claw, intent.

A criminal's tattoo upon my cheek,

An unwilling exile in far Jiangzhou,

I shall have my revenge some day,

And dye red with blood the Xunyang's flow.

At this point Song Jiang drinks some more, then laughs, and writes some more:

Heart in Shandong, body in Wu,

Drifting, I breathe sighs into the air.

If I achieve my lofty aim,

No rebel chief with me will compare.

So like any hip hip poet, Song makes a boast, and an enemy reports it. This leads to two major battles, and a massacre in the village across the river. Song Jiang's prophesy comes true. Great stuff.

This volume ends with the rebels besieging three village towns, each ruled by a single clan, and allied against the Liangshan rebels. For the first time, two women warriors make an appearance, namely Ten Feet of Steel, and Mistress Gu. Hopefully we see more of them in Volume III!

Magic also makes its appearance in this volume:  Dai Zong the Marvellous Traveller has two paper charms. He places one on each leg, and he has super speed, which makes him a very fast messenger/courier. He can also put one charm on a comrade's leg, and the two of them can travel at magical half-speed. Cool stuff!

And then there is the duel ax wielding Li Kui  the Black Whirlwind. He kills many, often unnecessarily, and to the chagrin of others in the gallant fraternity of martial artists. He is crude, always spoiling for a fight, over the top - and amusing.

I have already started Volume III, and have finally found a really useful resource for the book: a list of all the heroes of Mt. Liangshan.