The Obsidian and Blood trilogy by Ailette de Bodard, the first volume of which is Servant of the Underworld is probably the novel that has come closest to me to the feel of the "Heirs to the Lost World" RPG. The first novel is a murder investigation that is carried out by a priest of Mictlantecuhtli.

Servant of the Underworld is set in the Aztec capital prior to the Spanish arrival in the new world. I am about 130 pages in now. The first 20 or so were a little slow, but like Umberto Eco's The Name of the Rose, or almost anything by China Mieville, if you read a little further it really takes off!

The novel has supernatural elements, including gods who are imminent rather than transcendent.

There are some genuinely creepy moments. 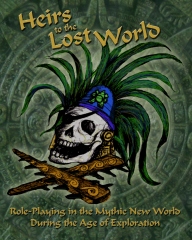 Author Ailette de Bodard is a woman of Vietnamese heritage who lives in Paris. De Bodard gets one detail of geography wrong - as far as I know there were no cenotes in Central Mexico - those were primarily in the Mayan Yucatan. But overall it is clear that she really did her homework and has created an immersive novel.

Everway's Fireson would feel right at home in this world - and probably depart for other spheres immediately!

Fans of Tekumel will want to check this out.
Posted by Tallgeese at 2:01 PM

Email ThisBlogThis!Share to TwitterShare to FacebookShare to Pinterest
Labels: Fiction, Heirs to the Lost World, Reviews