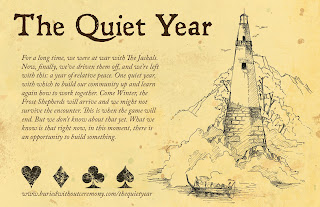 The Quiet Year is a card game that involves mapping. The players collaborate with the cards and a community map which they create, and explore what happens to a small community over the course of a year. The community, which has already survived the collapse of some kind of larger polity, has a year to prepare for the arrival of the Frost Shepherds, who bring about the end of things. Our gaming group played a year last night; it was a great experience.

The game starts with the players collaborating on establishing a few details of their community, and the landscape surrounding the community. They also need to identify a few commodities such as food and water and identify which are scarce and which plentiful. Players take turns defining features and drawing them onto the map. More details of the map are filled in during play.

Here is how our map looked (click on the image to expand it): 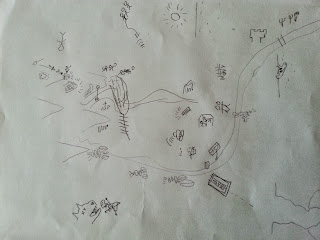 Our most plentiful resource was food in the form of crayfish. Unfortunately, the water supply of the town was not very clear. The mountains "west" of the town include a volcano, the statue of an ancient despot that has been entirely buried in volcanic ash, and the source of Signal, a mysterious commodity upon which the community responds which is a form of Clarkean astral wi-fi technomagic for communicating with the spirit world. To the southwest you can see one of the major hazards our community faced: cyberwolf zombies, who also had some kind of connection to the Signal. There was also another community to the northeast of the map. During the early moves of The Quiet Year, we built a dam to reduce the flow of water to their community, and then built a keep to guard the border.

Each turn stands for a week of time. A player draws a card for that week. The cards are color coded and progress from Spring to Summer to Autumn to Winter. Somewhere in the Winter cards is the Ace of Spades, which represents the arrival of the Frost Shepherds. Once they arrive, the game ends.

Each card typically has two options for what happens that week - or asks a framing/existential question. The player who makes the draw decides which option affects play for that turn. One of the early existential questions on a card I drew asked us to define the highest status group in our community. I made the decision that it was elders (sans priests and prostitutes) who rule as a council. A fairly conservative community in which elders were in conflict with youth emerged from my answer that elders were the highest status group.

Some options ruin or accelerate the advance of community projects, or introduce new problems (either natural disasters, issues due to outsiders, new discoveries, or new personalities, conflicts, issues and characters within the community.

Once a player has selected and dealt with one of the two options on the card for that week, the player may take one more of the following actions:


(I think all of the above is fairly accurate. I am reconstructing it from memory, as I don't own the game.)

There is also a mechanic for showing Contempt. A player can use this to register a point at which they do not feel heard. I think this mechanic is intended to increase inter-player tension and represent community conflict over player decisions that may feel arbitrary. We didn't use it.

It is very difficult to register Contempt for other people face-to-face in Minnesota.

Overall, playing The Quiet Year was a really great experience, and I would look forward to doing it again. As with the game Microscope, I see all sorts of ways the game could also be used to create a setting for an RPG scenario - particularly one involving a small community.

As far as the Frost Shepherds go, I wouldn't be at all surprised to hear that the designers had read Hal Duncan's masterpiece Vellum.
Posted by Tallgeese at 1:12 PM