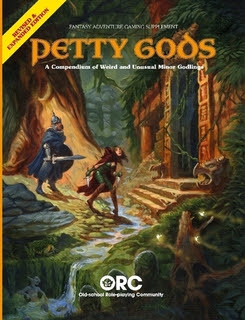 "You will find me more lordly and benign when I achieve the position of a greater god."

Those are the words of the immortal sorcerer, Prince Shool. Today I noticed that the phrase "petty god" was used in Michael Moorcock's first Corum novel, The Knight of the Swords. The term is deployed in both senses of the term, designating both a lesser god and a god with a propensity for pettiness. The novel is filled with petty gods in fact: Pilproth, the Gorged God; inadvertent organ donor deities, Kwll and Rhynn; and the sad deity who accompanies Serwde, the Brown Man of Laahr; perhaps the Dog and the Bear as well.

There's also just a suggestion of an association between giants and gods, which reminds me of another blogger's recent question of why there wasn't more interest in giants as a monster type...

Over the last week, petty gods have come up in a couple of other ways too. At last weekend's Fate of Tekumel game at Con of the North, I had a chance to use the Tzitzimine Star Demons minions and the non-canonical Eyes that I wrote for Petty Gods.

In fact, the Eye a player selected for her character was none other than the Eye of Petty Theogony! An ordinary sellsword was elevated for a good chunk of the session into a petty god in his own right, taking on the mien of a minor god of war. When I wrote up that Eye, I never dreamed that anyone would use it on anyone other than their own character! Players do find ways to do things with our creations that surprise us.

Co-creation makes us all petty gods.

Posted by Tallgeese at 7:32 PM