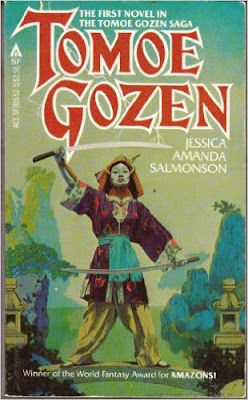 Jessica Amanda Salmonson is our Guest of Honor at this year's Diversicon 24, July 29-31. Right now I am re-reading her first novel, Tomoe Gozen, for the first time since I read it the year of its publication in 1981. It tells the story of Tomoe Gozen, a female samurai who is mentioned in the Tale of the Heike, the epic poem of the struggle between the Taira and Minamoto clans in 12th Century Japan.

This may have been the first novel I read that had openly LGBTQ characters, but at any rate it was definitely the first novel (for me) that did not make a "big deal" out of same sex attraction. This was just a few short years before I came out. My first reading of Tomoe Gozen was at roughly the same time that I was reading Death's Master and Night's Master by Tanith Lee, as well as Runequest 2nd edition.

The early 1980s was a good time for fantasy.

I'm about two thirds of the way through Tomoe Gozen, the first novel of a trilogy about the character. The novel has held up very well in the 35 years since its original publication. One of the things that is very striking upon re-reading it is how much the novel also touches on the hero's sense of her own madness/sanity as she has terrible and wonderful experiences across the landscape of fantastic medieval Japan.

After I finish Tomoe Gozen, I am going to read for the first time Salmonson's novel set in fantastic China, Ou Lu Khen and the Beautiful Madwoman (1985). My goal is to complete reading that novel before the Second Foundation reading group meeting on June 12, 2-4 PM at Parkway Pizza in South Minneapolis. Our topic will be the works of Jessica Amanda Salmonson - advance reading for the convention.

My itinerary after the reading group meeting will be to complete Tomoe Gozen trilogy, re-read The Swordswoman (Jessica's only ostensibly SFnal novel), and then read Anthony Shriek (her horror novel). I'll also be preparing a Ryuutama game for the convention, taking at least a little inspiration from her novels.
Posted by Tallgeese at 12:20 PM