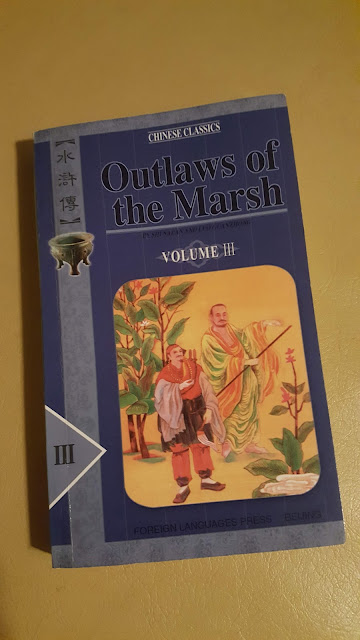 We're now past page 1,603 in this Chinese epic martial novel. In Vol. 3 of Outlaws of the Marsh, the scope of the action broadens significantly, from the individual and small scale melee clashes of Volumes 1 and 2, to predominantly large scale battles involving fortified villages, towns, and cities. Similarly, the targets of the outlaws' covert operations also shift toward larger targets, including the Eastern Capital of Kaifeng.

It took me slightly longer to read this volume (close to 40 days), as I had a few other books I was reading at the same time. The story continues to engage and entertain however.

A few things stand out in this volume:

We'll end with a quote from Chapter 72, when Song Jiang and close associates go undercover to see the lantern festival in the Eastern Capital (Kaifeng). They visit the home of one of the Emperor's favorite concubines. She serves our heroes tea, and the narrative describes the tea leaves as:
"finer than bird's tongues, [and] the brew was as fragrant as dragon's saliva."

Posted by Tallgeese at 4:48 PM