Tonight's game took place entirely within the Library of All Worlds, and took a really bold turn. The action picked up where it left off last time, with Percy talking with some scribes about his home sphere, while Tom was in deep conversation with another scribe about music, and the Library's collections.

Pahoeho, meanwhile, was in the Library gift shop. He browsed the various wares there, and soon noticed another odd shopper.

Her appearance is rather odd. She either has extreme pallor, or her makeup is really caked on. It's probably the latter, as some tattoos are just visible on her face under the white. And then there's her amber eyes...

He greets Pahoeho, and flirts a bit. She calls him handsome, and asks if he's a Spherewalker. He says yes, having most recently visited Fire's Wall, and brags of being immune to flames. The young woman snaps her fingers, and a flame appears. She touches it to his hand and Pahoeho doesn't flinch a bit.

The Scratch sales clerk quickly says: "No open flames in the Library."

The young lady snaps her fingers again, and the flame goes out.

Pahoeho asks her name, and what she's doing in the Library.

The young lady's name is Shattered Tower. (Pahoeho internalizes this as Crashed Tower; that's what he calls her later in the game.) Pahoeho recognizes Tower as the last name of an Everwayan family, introduces himself as Pahoeho Sun (another Everwayan family). Shattered Tower gestures toward the hand drawn handbills she is leaving in a few places in the gift shop. The handbills invite people to attend the Woke Forum tonight, when the drumming starts at the Wattle and Dub, one of the wattle and daub dwellings in Strangerside. 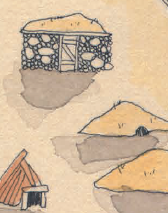 Shattered Tower hands Pahoeho one of the handbills: "You should come."

Pahoeho decides to leave the gift shop after seeing Shattered Tower shoplift some reading glasses. She goes deeper into the Library. He goes out to a wine bar in eyeshot of the Library. He'll keep a lookout for her when she leaves. [Later, he does see Shattered Tower leave, with quite the stack of books. Generally speaking, removing books from the Library is #NotPermitted.]

Meanwhile Percy wants to find out where the cat Whiskers, and his human, No Whiskers, went. The young warrior, Osbert Haukmune, goes along with Percy. They go up a few levels in the library, and find a quiet place near some grandiose, well-guarded doors. Percy does some spirit scrying and goes into a trance.

There are a lot of spirits here; there is a spirit on practically every shelf in the Library. Percy can hear their intonations, their recitations of favorite texts. (These are Shelf-Bound Spirits.)

Percy scries for the cat, but picks up another disturbance: one of the Shelf-Bound Spirits, a few stacks away, has begin shouting the records it guards: census records, names of Everwayans long past. The disturbance spreads: the guards leave the grandiose doorway they were guarding. There are other sounds: tearing, grinding of paper. Munching sounds. Falling books, book chains rattling, scroll cases clattering onto the Library's tiled flooring.

Whiskers and No Whiskers are at the grandiose doorway. The doors gear open. They step through. The doors close and gears click and whirr and lock in place.

Percy calls for help. A librarian comes, begins to shout for help himself. More guards come. The guards all fall with gruesome, terrible wounds. The tearing, grinding sounds continue, as Osbert draws his sword and approaches the noise. Books open themselves in mid air, scrolls unfurl. Pages disappear in chunks. Munching, grinding.

More guards arrive, and a Librarian-Sorcerer (some badass from the Acquisitions, no doubt) begins casting a spell. Terrible creatures suddenly materialize. Big, blind silvery bugs are consuming the books and scrolls. One bug begins chanting and gesticulating, and a rough-edged chiming oval gateway appears.

The chiming disturbs Tom, who has been deep in the Music galleries of the library (poetry; musical theory; recorded music on scrolls, playable on special lecterns; countless musical instruments from the Million Spheres). The player-lecterns resonate from the gateway's chiming and the alarums of the shelf-bound spirits. Tom pursues the source of the sound, and discovers his friends.

The Thysanurians have escaped through the ovoid gate. The only remaining trace of their gate is a fissure suspended in midair. The dust of consumed books and scrolls mixes with the fallen guards' blood on the tile floors. Osbert helps with the clean-up. Ape-like creatures emerge from service doors and remove the bodies.

Eventually all of the party comes together by the grandiose, gear-locked doors. The twin Librarian Administrator-Scribes, Spiral Scratch and Circular Scratch, attend to the party. The PCs ask how the doors can be opened? "It requires a key" the Scratch brothers say. "Who has the key?" the PCs ask. "There are three keys: one is in the possession of the High Pontifex of the Chamber Platinum, one with the Emerald King, and one with the High Priest of Lord Hermanubis. None are available at the moment."

Tom uses his magic to summon a musical instrument. He summons a clavicembalo and begins to play.

The gearing turns and moves, and the doors open. Beyond the doors it is dark, illuminated only by a shaft of moonlight and by stars. (It is daytime.)

The PCs enter the chamber beyond the door. It is a small round space. The doors close. it remains dark except for the moonlight which illuminates the cast iron staircase which ascends up the tower.

Pahoeho takes the lead, followed by Tom, then Percy, and finally Osbert. Flashes of heat lightning far above, the smell of ozone as they ascend, flashes of Fortunes as they ascend the steps.

Each step is a grating. Looking down through the slats, the staircase goes down infinitely. And so it also goes up.

Pahoeho Sun, a son of Everway, recalls the legend of the Stepwise, a royal staircase that one must ascend in order to become King.

There are three great flashes of lighting and three Fortunes ring out with thunder:

And the PCs are in another world.

Thysanurians were created by Jim and Jody Garrison of Hereticwerks, and are used with their permission. Thysanurian image by Jim Garrison.

Posted by Tallgeese at 9:53 PM

Email ThisBlogThis!Share to TwitterShare to FacebookShare to Pinterest
Labels: Campaigns, Library of All Worlds, Stepwise