Andrea Hairston and The Storm Hand. 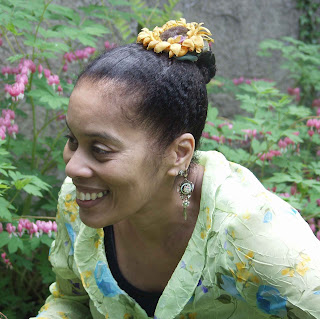 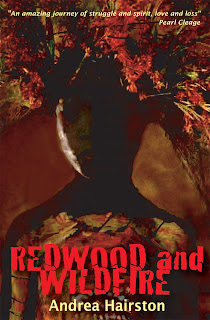 The novel takes place just before and at the beginning the Great Migration of African Americans from the South to the North - in this case from rural Georgia to Chicago. One of the two protagonists, Redwood, is an African American conjure woman who practices hoodoo. The other protagonist, Aidan Wildfire, is a mixed-race Irish-Seminole man who also has hoodoo-related powers.

Andrea Hairston's first novel, Mindscape, is a multi-perspective, fragmentary, and dense SF novel that is hard to get your head around. Reading it is an experience. Like someone handing you a play written in the future: a manuscript sent back in time, without footnotes. Maybe you can figure it out, maybe not. It's on you.

In contrast, Redwood and Wildfire is a deeply immersive historical novel. It is well-researched, and emotionally-engaging. Its fantastic/supernatural elements are tied to the cultures and landscapes of America. The novel deals with the racial terror and oppressive conditions to which African Americans were subjected in the South, while also exploring the experience of other groups, such as poor whites and people of native ancestry. Redwood and Wildfire is very much written in the tradition of Zora Neal Hurston's work, with its deep respect for African American and Native folkways in the Southern United States.

The narrative constantly moves across the the American landscape, from rural swamps of Peach Tree, Georgia to the streets and theaters of Chicago, the great White City of the North and the refuge for African Americans fleeing racial tyranny for a better future.

I am certain there will be comparisons between Redwood and Wildfire and Alice Walker's The Color Purple. But while the latter novel and later the movie were much admired by white liberals, the reception in the African American community was more mixed. In particular, Alice Walker's portrayal of African American men was seen by many people to be almost entirely negative, and thus unfair. Hairston's approach is much more balanced, and no less feminist.

So what does all this have to do with the Everway RPG? Well, the novel is all about storytelling, from H.G. Wells' War of the Worlds to Aidan's own story-journals. And, well, come into the swamp with me, and take a look around. There's more than gators and snakes here. They're all kinds of spirits including haints. These are ghosts, often with elemental powers. There's other spirits too. Evil spirits. There's herbs and roots for healing. Bottle trees to capture and eventually disperse evil spirits - and much, much more.

Conjure woman Redwood has a variety of powers, including the power of spirit travel and healing/drawing pain out of others. But one of Redwood's most potent powers she calls the storm hand. Redwood's storm hand reaches into the environment, giving her the ability to channel storm energies. Her storm hand has the power to call storms, push away storms, or hurt people (think of Darth Vader's telekinetic choking power) or kill people with a strike of the hand.

In Everway terms, The Storm Hand power is not frequent (indeed, if you use this power too often, you will become quite evil), but it is major, and versatile. I would also say it is extraordinary, so I'd call it a 4 point power.

The Storm Hand power is strongly connected to the elements of Fire and Water. This power is particularly appropriate for Spherewalkers with a connection to the god Ogun in the Fortune Deck. It would also be a good choice for Spherewalkers from groups (either indigenous or diasporic) with strongly syncretic religious traditions that involve spirit-work - especially traditions whose approach to spirits is nature-based as opposed to abstract-mechanistic.
Posted by Tallgeese at 4:30 PM