Table 3: Encounters Around The Arenas

The following encounters take place near the Arenas within the walls of the city of Everway. A few of the contests turn deadly, but most are competitive demonstrations of athletic and martial skill.


Each of these Encounters Around The Arenas was inspired by a card draw from the RPG Inspiration Cards. 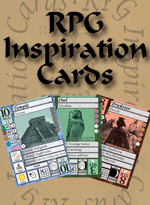 Usually I used a combination of the image, Title, and Archetype. I often used the Event, Character Trait, and Character Quirk descriptions as well.

Table 3: Encounters Around The Arenas (d12)

There are a few gladiator references from a certain Silver Age Marvel comic thrown into this table for good measure. Let me know in the comments if you spot them.