I'm sure a number of fans of Everway are aficionados of the small press RPGs that are often called Indie RPGs or Old School Renaissance RPGs. And, yes, I know these are technically separate and often contending schools of thought and practice, even though they are often doing almost exactly the same thing: publishing small press RPGs for specialized audiences. So be it.

Today I had another epiphany (two in two days isn't bad) on my way home from playing Rachel Kronick's gritty, Abercrombie-esque forthcoming RPG "Blade & Crown" with my gaming group. Perhaps it was the euphoria of yet another successful glorious episode of my character Stabber delivering the supreme beatdown, but on the drive home I suddenly started thinking about Aspects in Everway.

But then, I remembered that Everway isn't powered by the FATE game engine. It doesn't have Aspects.

Every character also has a story made of 5 Vision Cards. The Vision Cards each have an image. They also have questions on the back that point you towards, and ask you questions about the signifiers on the card.

Each card type in your game can readily be tied to narrative signifiers. Those are called ASPECTS.

Let's say every character has 6 of them:
ASPECTS are brief phrases or quotes that describe or evoke something about the character. ASPECTS are better when they are ambiguous, and can signify something that could be either good or bad for a character based on circumstances. Here's some examples of ASPECTS based on tarot-like cards:
So how do you use ASPECTS in play?

Well, each character should start each play session with five BEADS (an appropriate name for point-based tokens, using the name of an important local currency). 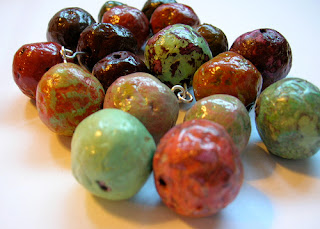 Whenever a character takes an action that involves one of their core ability areas, powers, or magic, they can choose to TAKE A BEAD ON ONE OF THEIR ASPECTS.

They identify an ASPECT that is relevant to their action, and TAKE A BEAD on it, spending one of their BEADS.

Doing so increases their ability score for that action by +1 for that action only. This simulates a character taking extra effort based on their destiny or inherent qualities, the favor and fortune of the gods, blessing of the elements, the cosmic wheel, etc.

BEADS replenish to five at the beginning of the next game session.

A player can award one BEAD to another player for good roleplaying or for doing something clever. It helps if the GM puts a kitty of BEADS in the center of the game table. Players can point to the kitty if they think they deserve to be awarded one.

Finally, a GM NPC or another player can TAKE A BEAD ON ANOTHER PLAYER'S ASPECT, placing the character at a disadvantage. This gives the GM NPC or other player a +1 ability score bonus, but they must pay a BEAD to the target of their action.

Worlds, kingdoms, scenes, locations, objects (Excalibuuuuuur!), NPCs, and monsters can all have APSECTS, too. Just base them on tarot-like cards and appropriate image cards, or invent ones that make sense for the person, place, or thing you are describing. Choose no more than 5 ASPECTS per entity.


Tags and Beads text by John Everett Till


This material is Open Gaming Content as described on the USAGE page at everwayan.blogspot.com


This document was inspired in part by the mechanics of the FATE system, as well as by the mechanics and setting of the Everway RPG. No challenge is intended to the product identity of Everway.
Posted by Tallgeese at 4:30 PM