Lost Days Of Memories And Madness

Imagine you are an immortal, decadent elf, living in a vast communal palace with numerous others of your kind. You vie for the favor of your King or Queen, or wait for the chance to oust and replace them. Your armies have conquered the entire known world, but they remain on the move. All of your kind are dependent on the memories of others. You are a group of memory voyeurs stealing the memories and experiences of conquered subjects - as well as the memories held by other elves.

Here's a sample memory:
Sounds pretty Everwayan with that "Emerald Dome" reference, no?

For the elves, madness is always on the horizon, but madness itself just becomes a part of play.

But it's a roleplaying game. 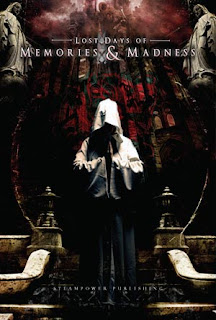 The game starts with each player crafting four memories on index cards or pieces of paper. Each memory is written, like the one depicted above, as an "I remember..." statement. Then players use tokens (glass beads in our case) to take turns bidding on the memories created. So your character can end up with memories created by other players and by yourself. Some memories are marked by a "K" which indicates a memory of Kingship.

Here's how the table ends up looking:

The player who has the "K" memory card with the most bid tokens on it (and there can be multiple K cards on the table, becomes the King. The King opens up the scenario being played, setting the stage and the initial challenge for the players.

I won't get into all of the action and mechanics, but the game is fun. People who have experienced and like Fiasco will already have a sense of how the game plays.It feels like it is most suited for long, single session table play rather than a campaign. Play can become somewhat PVP, as players may opt to take each others' memories. I hope we get to play this one some more!
Posted by Tallgeese at 4:30 AM