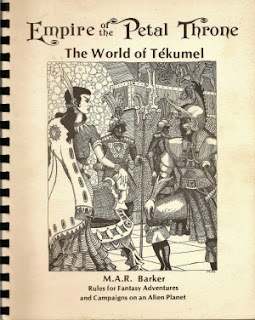 Yesterday, the Aethervox gamers met over at Jeff Berry's house (our traditional game spot, with its vast collection of Tekumel miniatures and props) to begin a new Fall campaign being GM's by Rob Leduc. Our default campaign uses a very simple narrativist d100 roll to resolve conflicts; characters in the default campaign have been created using many different systems, from Tekumel: Empire of the Petal Throne, to Swords & Glory, to my own Muugalavyani Priest of Gruganu who was created using FATE.

For Rob's campaign, which uses the original edition of Empire of the Petal Throne, we rolled up EPT characters for a "fresh of the boat" scenario. It was a great deal of fun. Each player created two characters. Mine were Akho-Akho and Tsuralnali. They are part of a distant island tribe, and therefore non-Tsolyani. Both are magic users. Akho-Akho is the better of the two magic users - his Psychic percentile attribute was in the 80s; in comparison, Tsuralnali only had a 41 for her Psychic skill - just average, no penalties.

I rolled an 11 on the percentile dice for Akho-Akho's ugliness, so he is not going to win any beauty contents. I have a pretty good idea why he is so ugly. It has something to do with his full-head tattoo of an Akho, the legendary "Embracer of Ships". (Note the image in the link - which is part of Brett Slocum's very fine GURPS Tekumel pages, shows a nipple-like bump in the center of the Akho, facing directly up toward the ship above. This is in fact a giant eye. I wonder if the form of this creature was also an influence on the avanc, the giant-eye-from-below in China Mieville's novel The Scar; of course, the Welsh myths of the afanc were also an obvious influence on Mieville.)

In contrast to Akho-Akho, Tsuralnali did fine in the looks department; IIRC, she was up in the 80s.

Unfortunately, I rolled only 1 HP for Akho-Akho. After which I apparently cried out with a great groan that elicited a belly laugh from Jeff Berry. He remarked that this was a common occurrence in the old days: you roll up a great character, only to be felled by a poor 1d6 roll for the HPs. He said this is why it is impossible to min-max with EPT.

Tsuralnali rolled a 5 for her HP. We'll see who survives longer. I have a feeling the law of averages will rule here.

I am looking forward to the campaign!

Oh, and we are fresh of the boat in Penom, the so-called "Armpit of the Empire", a bug-infested hellhole.
Posted by Tallgeese at 11:35 AM