The Magic Art Of Metallic Air, Pt. I 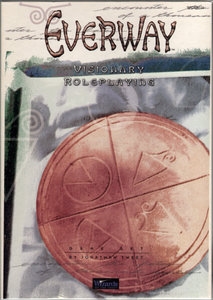 I am developing a specialized form of magic for Everway, which is a new experience for me.  Unlike Mage, a 90s RPG that I really liked a lot and did some fan writing for, I never tried to create my own magical traditions for Everway. Other people did, but I always shied away from it for some reason. I must have been afraid of getting it wrong. But that is changing now.

My current project is based on our gaming group's most recent experience with the Lost Days of Memories and Madness story-game. About a month ago, we created a rather interesting world  - one which I decided to port over to Everway. I decided to call that realm The Rust Gate.

There is a form of magic there that can produce something called metallic air. And you can assassinate someone by entrapping them in a pocket of coagulated metallic air. Nasty stuff - and it sounds like a wicked oxymoron. Two elements combined - something a bit challenging to conceptualize with Everway's magic system.

But I'll be trying to do just that. In addition to the Playing Guide, which sets out the rules for creating magical traditions in Everway, there are also these online resources that I'll be using as references: Kat's Guide to Magic and Twisted Confession's version of Jim Henley's Magic Formula for Everway.