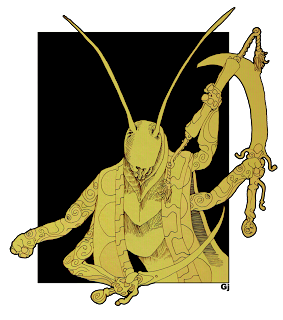 The Scroll Gourmands comprehend and remember what they eat. All texts are fair game for them, but these silver creatures preferentially consume magic scrolls, spell-books, atlases, maps, texts on comparative anatomy, and taxonomic classification. (Thus the rational decision to name themselves Thysanurians.)

Self-help literature, memoirs, and biography are particular favorites. They prefer these over any kind of poetry, fiction, or mythology.

Philosophical texts are a mixed bag for The Scroll Gourmands. Works of analytical philosophy, especially those with well-constructed syllogisms or using symbolic logic, are particularly choice. They detest works by philosophers from The School of Unravellers - especially those devoted to "overturning violent semantic hierarchies and oppositions."

They learn the magic they consume. These creatures can use invisibility spells or shapeshifting to pass by human monitors undetected. Mature Scroll Gourmands have usually learned spells to silence, blind or even unbind the Shelf-Bound Spirits that protect the Library of All Worlds.

They are born from eggs placed carefully behind bookshelves with particularly appetizing books. More Thysanurians are born than can possibly survive. Whether they do or not is irrelevant. Even those who don't survive will do a great deal of damage to the written word.

A few Thysanurians have been found to have functioning compound eyes. Those have tended to be vampiric specimens, although it is not clear whether their vampirism is an undead state or whether blood is a natural food source for them. What is clear is that these particular specimens have the ability to ingest through their victim's blood the knowledge that their brethren have obtained from consuming texts.

The Scroll Gourmands in Everway:

Thysanurians were created by Jim and Jody Garrison of Hereticwerks, and are used with their permission. Thysanurian image by Jim Garrison.
Posted by Tallgeese at 4:30 PM