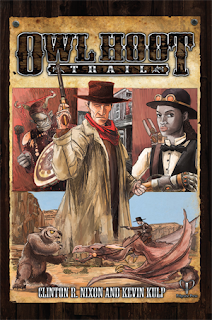 Since coming back from South Dakota, I have been thinking about running a Western game. I am itching to try this game out.
Posted by Tallgeese at 5:06 PM 2 comments:


We're inundated with convention gaming ideas at the moment. Con of the North 2014, the largest gaming con in the Upper Midwest, is scheduled for February 14-16, at its new location: Crown Plaza Minneapolis West. I usually run 3 or so games there as part of the House of Indie Games theme room. This year things are a bit more complicated with the new space, theme tracks are on but room arrangements is a more complicated picture. There will also be a Tekumel theme track.

I will almost certainly be running a FATE Core based Tekumel game, probably set in the city of Katalal. I am also thinking about running 1-2 more games.

Event descriptions need to be postmarked by September 3, 2013, so I have about a month to get this all figured out.

EDIT: I am surprised I forgot to list a Ubiquity system game: either All for One: Regime Diabolique, Hollow Earth Expedition, or Leagues of Adventure. We need to consider those games too.
Posted by Tallgeese at 11:32 AM 8 comments: