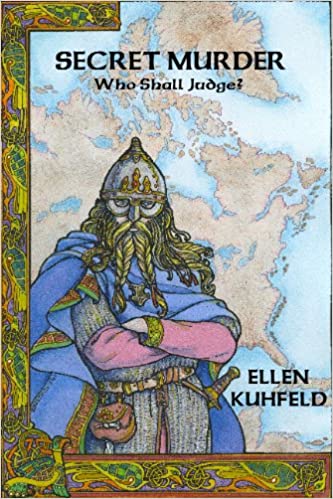 Ellen Kuhfeld's Secret Murder: Who Shall Judge? was the August 2020 selection for the North Country Gaylaxians' Book Club. It is an alternate history novel set in a 14th Century Minnesota which has been settled by Norsemen in the north, English in the south, with an ongoing presence of indigenous people elsewhere. Technology is Dark Ages.

Not surprisingly perhaps, where Minneapolis is in our world, is where the English host trade fairs. This short novel features the murder of a Norse trader, the suspicions directed against a rival Northman, and the investigation of the murder by the English bailiff.

It's a really fun story, very immersive, written in a terse style similar to Eleanor Arnason's (her own style based on the Icelandic epics). Candidly, I am quite tired of "Viking" roleplaying games, but this short novel made me think it might be quite fun to run something like Kevin Crawford's Wolves of God: Adventures in Dark Ages England.

Ellen is a local author, and she was able to join us for the book discussion, which was as delightful as always.

Posted by Tallgeese at 8:29 PM No comments: