#StayAtHome: "Outlaws of the Marsh" 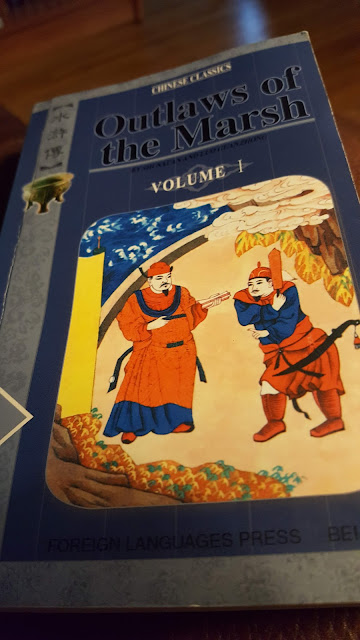 One quarter of a lifetime achievement unlocked: I finished the first of four volumes of Outlaws of the Marsh aka Water Margin aka the Marshes of Mt. Liang aka All Men Are Brothers. Only 1500 more pages to go!

Outlaws of the Marsh is 14th Century Chinese novel about events at the end of the Song Dynasty in the 12th century. The state is corrupt at every level. Honest people cannot make a living without bribery, and are forever at the whim of officials. A group of bandits and people who have fallen due to various crimes take to the slopes of Mt. Liang, and to the vast wetlands surrounding the mountain (the so-called water margin) and the greatest assemblage of thieves, swindlers, and martial artists come together.

The novel is episodic, with a cast of 108 heroes. If you intend to run a martial arts RPG, this really is the ultimate source material. I'm looking forward to starting the next volume. I have an RPG campaign in mind, eventually. 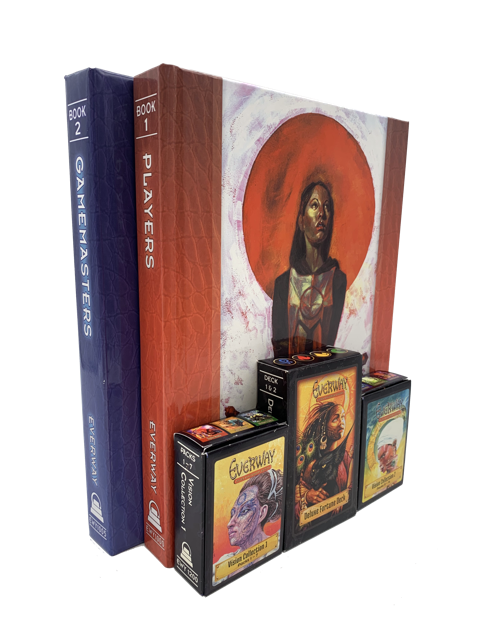 Everway's Silver Anniversary Edition offers two ways to access the images that drive the game: there will be actual cards for the Vision Deck, Season Deck (a new feature), and Fortune Deck, and a huge chunk of Book 1 - Player's Book also reproduces the Fortune Deck and the Vision Deck (which includes more images than found in the original Everway boxed set).

Since I am running my new campaign using the Silver Anniversary Edition, and we are playing online, I was pretty worried about how character generation was going to go. We play online in two hour sessions, weekly. Would that be enough time to generate characters? Would the players be able to understand the basics of setting and mood for such a visually oriented and reflective game in the virtual environment?

I decided to run in Zoom, rather than our usual home on Discord, because video quality is better. (Or at least I have more confidence in that platform with respect to screensharing and video interaction.)

One of my four players DOES have the original edition of the game (which he purchased online recently), so not surprisingly he got the furthest with character generation last night. For the Vision stage of character creation he was able to use his own set of Vision cards to select five that resonated with him for creating a character. He did the same with selecting his Virtue, Fault, and Fate using the Fortune Deck.

For the other players, I did a screenshare of the Vision Card chapter of the new Player's Book, so that they could see all the cards - and the questions associated with each Vision card. I also walked players through  the setting chapters of the Player's Book to give them a sense of the game environment: the much expanded map of Roundwander, the City of Everway, and various images in the book. This helped the players to "get" the mood of the game: mythic fantasy. I also showed players the cards in the Fortune Deck, and the various images of deities that are included in the deck. This was a useful anchor as well.

As we began character generation we also explored a Premise for the campaign, which the new edition brings into stronger focus. What brings the characters together? What kind of group are they?

The players decided that their Spherewalkers have come to Everway after learning that they have a shared ancestor - some relation has invited them to visit the City of Everway. I thought this was a great idea. We agreed that this might be come kind of crazy uncle. When I explained the matriarchal-matrilineal family structure of Everway, they speculated that their relative might be a "crazy aunt" instead!

The visually rich review copy to which I have access gives me confidence that GMs will be able to create an authentic Everway experience online. The range of Vision card images did what they always do: they gave the players some ideas about other cherished card collections that they might raid for the Vision stage of character development! That was another "win" for the session, and very consistent with my experience running the RPG face-to-face and play-by-post in the past.

We did about two hours of discussion and exploration, the players will do a bit of image selection sessions, and will finish characters and begin the campaign in the next session.

While Everway doesn't have character classes or levels (the original of course came in a white box, so comparisons to D&D are both inevitable and illuminating), but the characters emerging seem to fall into the following categories:

So this promises to be a well-rounded party. I am looking forward to their adventures together!
Posted by Tallgeese at 12:06 PM 3 comments: 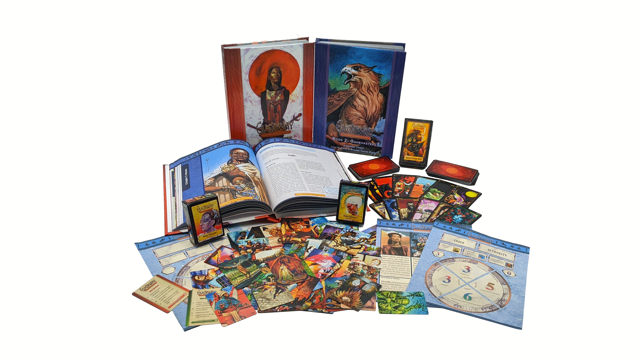 After I bought the first edition of Everway, I dropped it off at my friend Amon's house. I came back later, after I had purchased some dinner, and saw that he had filled a dining room table with Vision Cards from the box set. It was such a splendid array, and he was quite impressed to see Ogun on one of the Fortune Deck cards, as back in the early 1990s, there were still relatively few depictions of characters or beings of African descent in RPGs! Everway was probably the first truly multicultural and inclusive RPG in that respect!

Twenty five or so years later, I am so thrilled to be beginning a new campaign for Everway with the new Everway Silver Anniversary Edition which is about to go on Kickstarter. Tonight we will step into character generation, which feels like returning to the source!

To learn more about what's going on with the Silver Anniversary Edition, you can join the Everway Facebook group here. To get notified about the launch of the Kickstarter, you can sign-up here.

The Everwayan blog was created to celebrate everything Everway, so expect updates about how character generation and the campaign are going!