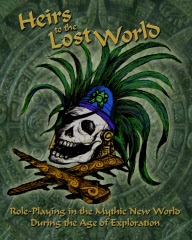 Last night I had the good fortune to play one of my favorite games and game settings: Heirs to the Lost World, an alternative 17th Century RPG set in a Mesoamerica with Aztecs, Mayans, Maroons, and Eurpean settlers, pirates, occultists, and traders. Heirs author Chad Davidson ran the adventure, which was an updated and improved version of a game I ran maybe 10 years ago at Con of the North. The scenario was partly inspired by an old Shadowrun module, translated into Heirs' 17th Century multicultural setting.

I won't give away the plot, beyond saying that it had something to do with high stakes synchretism.

It was such a fun group with which to play! Heirs has a great wager-based stunting system (really, the best one that I have played), and this group of players really got into it. Stunts (and PCs) were flying around the main scene of the action: a huge 3D Mayan temple that Chad had built. It was a really stunning prop, the kind of thing I wish I could pack up and take to Tekumel oriented cons like U-Con!

Here's hoping I get another chance to play with this group of players.
Posted by Tallgeese at 10:29 AM No comments:

Email ThisBlogThis!Share to TwitterShare to FacebookShare to Pinterest
Labels: Events, Heirs to the Lost World 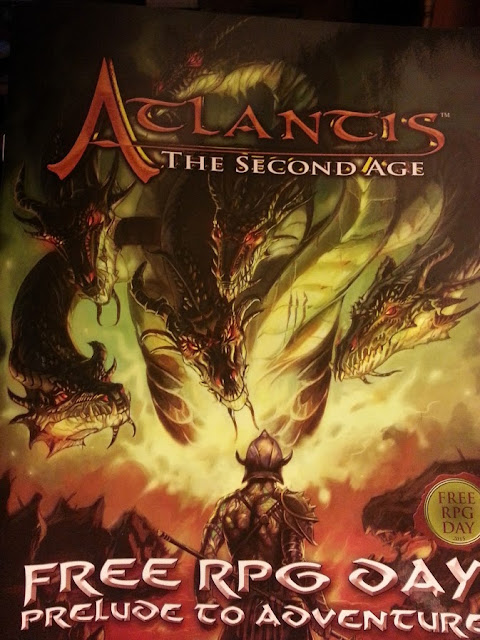 On Saturday, June 20, we'll be running Atlantis: the Second Age as a Free RPG Day event at The Source Comics and Games in Roseville, Minnesota. The game will run from 2 PM-6 PM.

Atlantis: the Second Age is a swords & sorcery RPG set in an antediluvian age where heroes can affect the course of world events. Inspirations include the works of Fritz Leiber, Michael Moorcock, Robert E. Howard, and Clark Ashton Smith.

With giant sloths and intelligent apes.

This new iteration of a classic pulp fantasy RPG has a strong Afrocentric vibe- although it is accessible to anyone.

Saturday will be my first time running the RPG, and I'll be using the streamlined rules presented in the Free RPG Day book. I'll also have the core book and supplements with me during the session, and plan to use the Action Deck designed for the game.

Please stop by and play the secnario or just kibbitz for bit if you have time!
Posted by Tallgeese at 9:12 PM No comments: