On Christmas Eve, I finished Karl Edward Wagner's second Kane novel, Dark Crusade - as one does. It was about a 100 pages shorter than the first Kane novel, Bloodstone, and a bit less satisfying. Part of what made the novel less satisfying was that the science fictional aspects of the setting were less evident in the novel. It has more of the feel of classic swords & sorcery, and it's entirely possible that there were no long-lost alien artifacts anywhere in the novel.

But I could be wrong.

Another thing that made the narrative a bit less satisfying than Bloodstone, was that the story is a bit more disjointed, depicting the ebb and flow of a bloody religious crusade from several distinct viewpoints. Kane comes across as a (mostly) unsympathetic character, an opportunist, who betrays both sides in the conflict for his personal gain. It's not until nearly the end of the novel that we discover there is more to Kane's agenda than empire-building.

When we do see his real interests, which revolve around an ancient fortress called the Ceddi ("altar" in an ancient tongue) things get very interesting indeed, in a very multiplanar, Everwayan sort of way. Developments late in the novel push in directions that will be very welcome to fans C.L. Moore and Michael Moorcock.

After finishing Dark Crusade last night, I started in on "Reflections for the Winter of My Soul" the first of a few short stories collected in Death Angel's Shadow that set the stage for the third and final Kane novel, Darkness Weaves. "Reflections" starts in the immediate aftermath of Dark Crusade, and the tone is wonderfully atmospheric. Wagner is a good novel writer, and a great short story writer.
Posted by Tallgeese at 4:39 PM No comments: 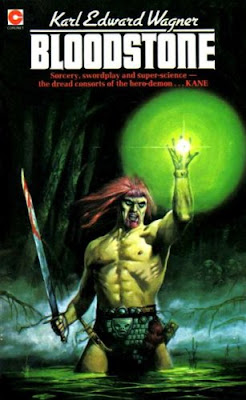 Over the last three weeks, I've read about 800 pages, including both a number of  short stories and a novel, featuring Karl Edward Wagner's swords & sorcery hero, Kane. I'm reading the stories in more-or-less the inferred chronological order in which the stories occurred in the life of Kane. I started with the first Kane novel, the Bloodstone, and then progressed to the short story collection, Night Winds. Sunday night, I began the second Kane novel, Dark Crusade. I think it's entirely possible that I may read all three novels and the two short story collections of the recent Centipede Press edition by the middle of January. Maybe even by year's end.

Last summer (2016) I re-read the original Elric saga, and Kane is in the spirit of Elric in the sense that he is a not entirely sympathetic protagonist. He's violent and selfish. Pragmatic in the extreme. There is a psychological depth to his character and to the Kane stories that you don't frequently see in swords and sorcery.

Like Elric, Kane is both a puissant fighter and a skilled sorcerer. There's a legend about him, and many intelligent people try to stay out of his path. Others are attracted to his intellect, or to his potential for wreaking destruction on others. I'll be posting more about these stories in the near future as I continue to progress with the reading.

Posted by Tallgeese at 8:42 AM No comments: