#StayAtHome: "The Shadow Over Innsmouth" by H.P. Lovecraft 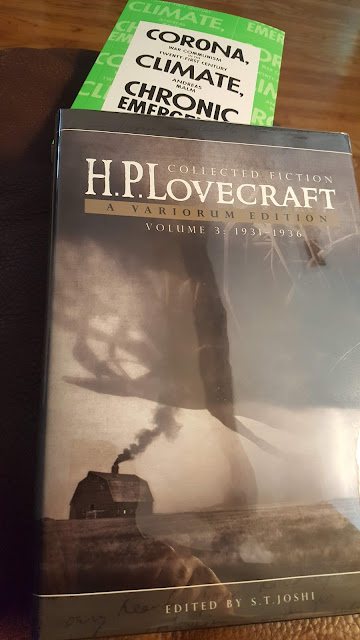 It's still racist toward immigrants after all these years. The last time I read H.P. Lovecraft's* "The Shadow over Innsmouth" was back in the mid-1990s. Twenty five years later, the narrative is still fueled by horror at miscegenation between traditional New England seafolk, and South Pacific islanders (and marine Deep Ones). Innsmouth is shunned by its neighbors. Their racial alterity makes them a threat. It's no wonder the residents of Innsmouth are so vigilant about visitors to their town.

I reread the short story because I am playing in a Delta Green RPG campaign which deals with the matter of the Deep Ones. Our P.C.s were preparing to return to Innsmouth to see if there were any remaining traces of the Deep Ones and their human-Deep One hybrid progeny. The GM was ok with me reading the short story for background, because my character had uncovered the military accounts of the Innsmouth Raid. I did pick up a few relevant details, so it was worth rereading.

This time round, I read the short story in the three volume hardcover "variorum edition" published by the Hippocampus Press. (That edition has a fourth volume of short stories that Lovecraft edited or ghostwrote for other people, and it is unfortunate that the fourth volume is only a trade paperback.) The hardcovers were much anticipated as the "definitive" edition of Lovecraft's work, with significant (and insignificant; they're mostly insignificant) textual variations exhaustively footnoted. However, this set of books is far from "definitive": the only other story I have started to reread in the collection, "Dreams in the Witch House" has a horrible multiline typesetting/editing botch! I don't know how this got past the editor, S. T. Joshi. The Library of America edition of the same short story is not similarly botched, so this error must have been induced in the publication of the variorum edition. Not good, especially at its price point.

So here is the really interesting textual variation in the story: there is a whole paragraph toward the end that was excised, in which the narrator, after escaping Innsmouth, expresses his anxiety about the possibility that he will experience progressive somatic changes that will reveal him as a Deep One. This anxiety has more than a little of the Epistemology of the Closet about it.

*My first attempt to write the author's name in this post, I wrote his name as H.P. Innsmouth!