Do You Know About The City Of Lebek?


If you haven't heard about the city of Lebek, or the other cities in this series of illustrated city books by Xavier Hernandez and Jordi Ballonga, do yourself a favor and check out Rachel Kronick's post on Lebek today.

I have not used Lebek yet, but I have used their Barmi book for a REIGN of Rome six hour marathon, and their Umm al-Madayan book for a Legends of Anglerre game set in a North African version of China Mieville's The City and the City.

They're great resources for gamers. I'd what +Paolo Greco is doing with the artist Brian van Hunsel's Galastanen, and I'd love to see that image get a similar cross-time treatment.
Posted by Tallgeese at 8:01 AM No comments:

Shared City In The Seams


Tsojcanth has just posted this beautiful city-map by Brian Van Hunsel of the City of Galastanen and offered it up as a shared world location for people to put into their own settings. Stepping through the Lion Gate gets you there.


Because Galastanen exists in a seam of sorts.
It's where all the universes were folded and quilted.
If such a concept could be called "where".

This seems perfect for placement somewhere in the Everway-Otherway continuum.

It must be there somewhere.

We will find it, sooner or later.

I'd encourage you to check out Brian's Deviant Art page. He has all sorts of beautifully detailed maps and images there.
Posted by Tallgeese at 6:06 PM 4 comments:

Doctrinal Differences In The Sun Faith

The Kirsi claim the Sun Faith as their own, and there are some precedents for their claim that they were the first to adopt the faith. The Kirsi point to their contact with the exiled generals of the Heretic King, who took refuge in the fortress-town of the Abode of Departure, as the true source of the Sun Faith.

However, the true story is more complicated.

The Sun Faith's origins indeed trace back to the Heretic King. But it was centuries later that the Sun Faith's Prophet was martyred in his homeland, the Sixth Kingdom. After the Prophet's death, many who were loyal to him went into exile in the West.  They rejected the worship of the beast-headed gods of the Sixth Kingdom, as well as the cult of the Eternal.

In the Western Deserts, these exiles from the Sixth Kingdom met the Meru, pastoral nomads who roamed the lands as free clans. They intermarried with these Meru clans. The Meru for their part  adopted the Sun Faith, and brought it to the people of neighboring lands.

The Kirsi version of Sun Faith practice makes place for the veneration of these ancient saints and prophets, which accounts for the religious arguments that often break out when Kirsi and Meruan Sun Teachers debate with each other the finer points of the Sun Faith's scriptures and doctrines.

The Kirsi, the Meru, the Sun Faith, and the Sixth Kingdom are part of the default setting of Kevin Crawford's medieval African pastiche RPG, Spears of the Dawn. This post expands on that setting  for use with both Everway and Spears of the Dawn, and was written to comply with  the non-commercial usage guidelines on the Sine-Nomine blog.
Posted by Tallgeese at 9:00 AM No comments:

Email ThisBlogThis!Share to TwitterShare to FacebookShare to Pinterest
Labels: Spears of the Dawn

The Sandgates Of The Sixth Kingdom


The lands of the Kirsi and the Sixth Kingdom to the east are prone to sandstorms. When these vortices of earth and air reach sufficient intensity, they can become Sandgates which open onto different realms or spheres.  Sandgates are often recurrent, returning again and again to consume a particular piece of land.

Recurrent storm-gates are often given specific names by Spherewalkers and wise-folk. They often create predictable gateways to specific realms. For example, the Sandgate called The Mother of Ruin connects to the realm of Bonekeep, with its fearsome Ghoul Queen.

The legendary Sandgate known as the The Lure of Thieves connects to the sandstorm-wrapped city-realm known as The Blind Place.

Every tower in The Blind Place holds untold riches; but every hoard in the city has also been tampered with by strangers.

The city's inhabitants have been blinded by the permanent sandstorm which shrouds it. This rich realm is ever-plagued by foreign thieves who are only too willing to take advantage of the city's blind inhabitants. Because of this, The Blind Place is also called The City of Grasping Hands.

But more than one too-clever thief has fallen victim to the city's many sand spirits. Some seek this doom, as the brink of death by sand drowning is said to bring revelations and ecstasy.


The Kirsi and the Sixth Kingdom are part of the default setting of Kevin Crawford's medieval African pastiche RPG, Spears of the Dawn. This post expands on that setting  for use with both Everway and Spears of the Dawn, and was written to comply with  the non-commercial usage guidelines on the Sine-Nomine blog.
Posted by Tallgeese at 9:51 PM No comments:

Email ThisBlogThis!Share to TwitterShare to FacebookShare to Pinterest
Labels: Everway, Gates, Spears of the Dawn


I was admiring Tony DiTerlizzi's beautiful illustrations in the Planescape monster books the other day and had the realization that Planescape is a setting where you don't need elves, dwarves, and orcs. There are numerous other races that are weirder and more interesting. And for that matter, the humans in this setting are pretty interesting, too. I don't see how you could live in and/or visit Sigil and be anything but interesting.

As I was reading the books, I came across a number of things that could be readily ported over to Everway and Otherway - particularly the latter, as there is more room for monstrous races the further you get from the human-centric realms close to Everway. But still, no need for elves, dwarves, and orcs among the non-humans.

Which got me thinking about the numerous monsters showcased over at Hereticwerks. Not an elf or a dwarf in sight, which is not surprising, since Hereticwerks takes far more inspiration from the 19th Century fantastic and horrific than from Tolkien.

While searching for images of the Hlyss, I came upon this post over at Old School Heretic (another blog by the creator of Hereticwerks). It's an essay written over three years ago that has some interesting things to say about the originality, or rather the lack thereof, in the fantasy mainstream in gaming. The phrase "fantasy mainstream in gaming" is not a term used in the original post. I am using it here because my feeling is that a lack of originality in fantasy creation is not exclusively a problem for the OSR. It is really a problem for the entire field of fantasy gaming, with a few exceptions, which are noted in the essay.

And check out the illustration that accompanies the Old School Heretic post. It's a creature I want to know more about. We need more of creatures like it.
Posted by Tallgeese at 6:46 PM 2 comments: 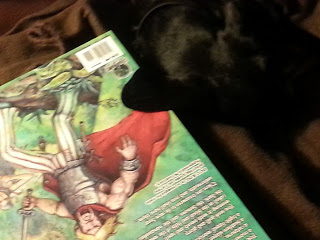 So busy writing grants
That I can barely see
So why not take a look
At my dog-eared DCC?
Posted by Tallgeese at 6:42 PM No comments:

The Architect Of The Abode Of Departure, Pt. II

This is our second post on the builder of the fortress-town, The Abode of Departure. Last post, I used the Porky's architect mechanics to mine for background on the architect of the fortress-town. Both posts are informed by Kevin Crawford's Spears of the Dawn RPG, and of course by the setting of Everway itself.

So what do we know about The Builder of Monuments, as the architect was known? He was an architect of the Sixth Kingdom who lived several centuries before the Heretic King. The architect served the court during a time of scarcity and war. As a result, he was able to complete a number of significant projects, but not nearly as many as an architect of his quality would have been able to do in a time of peace and greater prosperity.

The Abode of Departure was a very expensive commission in a very remote part of the empire. This may not have been the original name of the structure, which was built to shield the Pharaoh's lands from  from some chaos or danger to the north of The Abode of Life. It's primary patron in the royal treasury was the Pharaoh's Chief General. The Pharaoh's Armies provided the labor for construction.

The fortress-town was built with local stone to reduce the potential for weathering. The architect was equally attentive to local hydrology. The Builder of Monuments made the oasis-chain work for the fortification. Its structures draw potable water from deeper in the valley and store it in great cisterns deep beneath the fortress. This feature allows a defender to withstand a long siege in relative comfort.

The fortress-town's location drew two meddlesome factions that interfered with the structure's construction in numerous ways. The first faction was the priesthood of the God of Storms and Desert Might. For this faction, the structure's location on the fringe of the Sixth Kingdom's north-westernmost deserts and its close proximity to foreigners made the location an ideal spot for one of their temple fortresses. Did they succeed? The iconography of their deity can be found throughout the fortress-town, and particularly in its southernmost precincts.

The second faction were the hill tribes who made their home in The Abode of Life. Historically these peoples - the ancestors of today's Kirsi hillfolk in the valley - depended on trade with their settled neighbors in the desert and scrublands to the South. They resented the closure of their natural trade routes, and the disruption of their relations with kinfolk in the South. Some found their way into the community of the fortress-town, and carved their own secret ways through the town's cistern systems and aqueducts. So the fortress-town's security was never perfect.

The Builder of Monuments on his own initiative built three hidden structures within the fortress-town.

The first is a vast chamber that today is called The Hall of Departure. Buried deep under the central palace of the fortress-town, this structure illuminates itself. It is well-guarded and said to be a Gate which opens onto an infinity of other Gates.

The second hidden structure is simply known as The Sanctuary. The Kirsi say one is cursed to even utter its name or to inquire in any way about this structure.

The third structure is a vast mechanism built according to secret spell diagrams drawn by the Priests of Thoth. This mechanism was designed to come to life if the fortress-town was ever taken by invaders. In that contingency, the mechanism would open a vast sinkhole beneath The Abode of Departure; desert sands would swallow it whole.

The question is why this hasn't happened already? First the town was taken by an exiled General of the overthrown Heretic King. During the Long War, The Abode of Departure was the first stronghold of the Eternal taken by Kirsi warriors. It remains in Kirsi hands to this day. The question remains whether the town is living on borrowed time, or if the ancient mechanism somehow has sand in its works.  Time will tell.
Posted by Tallgeese at 2:04 PM 2 comments: