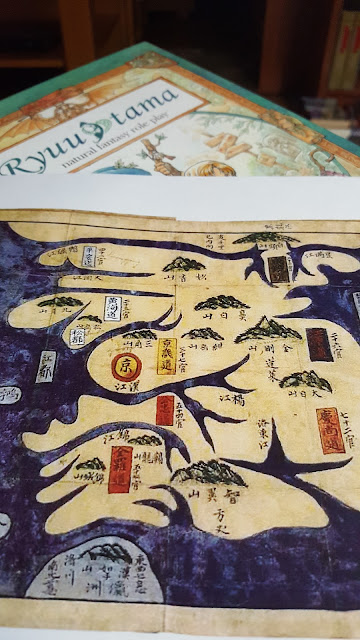 This is the "world map" for my Ryuutama session at Diversicon 24 this weekend. The game happens from 1-4 PM on Saturday. My favorite game to run this year has been Ryuutama. Its rules are easy for players to learn. The characters are interesting. The monsters range from cute to terrifying. The game's mechanics are very traditional, but the writing and art do most of the heavy lifting in creating a Miyazaki mood. Come join us if you're coming to Diversicon.
Posted by Tallgeese at 9:22 PM No comments:

Email ThisBlogThis!Share to TwitterShare to FacebookShare to Pinterest
Labels: Ryuutama 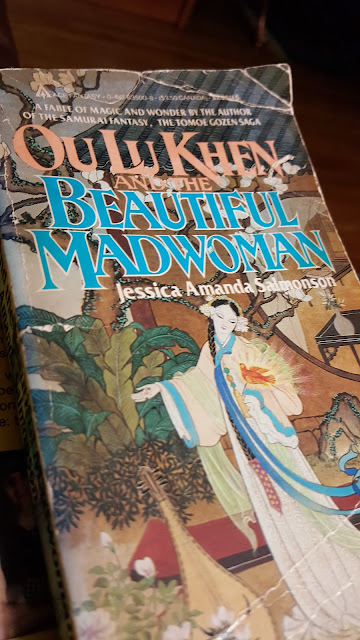 A couple of months ago, I found a copy of Ou Lu Khen and the Beautiful Madwoman (1985) by Jessica Amanda Salmonson. I missed out on reading this work in the 1980s. Now, I've been fond of Jessica's other works from back then for decades: especially the Tomoe Gozen trilogy, the singleton novel, The Swordswoman, as well as her two Amazons anthologies. Each of these for me served as a companion piece to Lee Gold's classic and magnificent samurai RPG Land of the Rising Sun - but the value goes even deeper.

With its overtly LGBTQ characters, Tomoe Gozen was also a kindred spirit to the classic RPG works Deeds of the Ever-Glorious and the Tekumel Sourcebook by M.A.R. Barker. It might be an exaggeration to say that these works are the reason I am alive today. All I can say with any certainty is that they were among the very few things that sustained me in the days when I was struggling to come out. Back then positive representations of LGBTQ persons were few and far between - in both SF&F and gaming.

But Ou Lu Khen and the Beautiful Madwoman (there, I typed the title for the first time without writing "Beautiful Swordswoman"!) is very different from the other Salmonson novels that I'very read. The other novels are written in the terse style familiar to readers of swords & sorcery. Ou Lu Khen's style is more meditative, reflective, lyrical, and descriptive.

It takes its time going places.

But it does go places, and that's not always something that happens (for me) in stories about unrequited (or almost-unrequited) love. The novel is very intentionally an exploration of human suffering. It takes the form of a quest - really, five different characters' quests - or three journeys along the same path.

On these journeys, we encounter a river serpent, a giant frog monster, a winged demon that calls itself Garuda, a weretiger, a Naga, and an incarnation of Ganesh. We wander inside a vast, iconic ancient-ruined-city-as-dungeon. In a moment of transformation, we meet a bodhisattva, a place in which the novel reminded me of another enlightenment occurring long after (and long before) the novel was written.

People interested in Buddhism and fans of Hmong forest tales are in for a treat.
Posted by Tallgeese at 7:15 PM No comments: