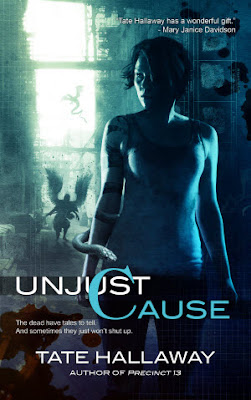 Alex Connor is coroner for the city of Pierre (pronounced "Peer"), South Dakota. Coroner is an elected position, so no worries that she's had little to no professional training for the role. She can talk to the dead, as well as curse people, so Alex has other skills.

She also has a steady boyfriend, Valentine, who is a dragon, and another who is a witch of sorts. The fact that this book is published by a small press means that Lyda was free to explore this poly triplet a bit more than she might have been able to with a major NY publishing house. Did I mention that Alex also has a gay roomate? And knows gay werewolf bikers? There are apparently a LOT of gay people in South Dakota. Who knew?

Lyda presents a mystery, occult antagonists, the protagonist's gradual self discovery about who she really is (or might be). Alex has a few more things to discover before she can really "come out" as precisely this, and not that - but no worries, she is on the path to figuring things out.

This was a fun story but it shouldn't be lost on the reader that it also dealt with a mystery related to a form of historical racism in the U.S.A. There are lots of fun supernatural elements at play in this semi-urban, often rural fantasy, but also a serious crime to uncover.

There is a possible GM tidbit in this novel too, just one of the best "dragon traps" that I have seen to date. Alurax, beware.
Posted by Tallgeese at 9:43 PM No comments:

Email ThisBlogThis!Share to TwitterShare to FacebookShare to Pinterest
Labels: Alurax, Inspirations, Library of All Worlds, Reviews

#StayAtHome: Gardens of the Moon 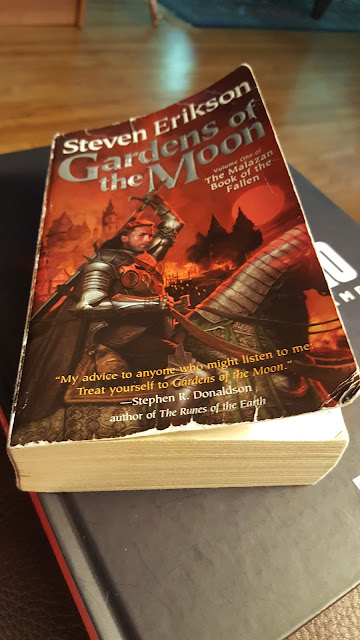 This morning I finished Steven Erickson's Gardens of the Moon. This book begins the seemingly endless series of huge novels by Steven Erickson and/or Ian C. Esselmont about the Malazan Empire. Erickson describes this series as heroic fantasy, and at the same time claims that the book is in the vein of Leiber, Howard, and Cook. He sees heroic fantasy of the kind he writes as an entirely separate fantasy tradition, rather than a response to J.R.R. Tolkien.

I kind of buy that argument and would probably label this as a military fantasy a la Cook, since not too many of the characters are actually heroic in the traditional sense. The Leiber element is the view of the dirty urban streets below where the noble classes live (and the city as character), and the scoundrels who live there. But the novel certainly compares with Tolkien in terms of the epic battles that occur. There's just a lot more grey, and a lot more hearts of darkness than in Tolkien. There's also plenty of elder races, so not entirely outside the tradition of fantasy that Tolkien helped to establish.

This novel took me two weeks to read. Or nearly twenty years, as I have made many attempts to read it in the past, and never gotten much beyond page 125 before. It was a 657 page novel, so considerably shorter than Deadhouse Gates, the next book in the series. That one is 836 pages long.