Today at The Everwayan, we have another member of Everway's original and ancient Odd Families: Clay Digger, a miner in the galleries below the city. The Digger family has maintained its longstanding monopoly on mining activities. But the City has expanded so much that mining for coal and precious metals now happens only at the edges of the realm of Roundwander, and in the spheres beyond the gates.

But the Digger family also maintains its premier role in the moneylending arena. And like all of the Odd Families, the Digger family is matriarchal and matrilineal. The Diggers' wealth is controlled by a handful of elder-sisters at the top of the clan hierarchy. Their message for everyone else in the family is: "Wait your turn."

Of course, not everyone in the family is willing to do that. The young and ambitious will always seek ways to get ahead. One of the ways is to find the Forgotten Vaults: one of the many hidden and often forgotten places where the Digger wealth of earlier eras was stored.

Grit Digger is young and unafraid. She delves deep, hoping to find some of her family's ancient buried treasure. Mums the word to her clan mothers, who have begun asking pointed questions about where she goes when she disappears for a day or two at time.

Starting Package:
Posted by Tallgeese at 9:51 AM No comments:

Email ThisBlogThis!Share to TwitterShare to FacebookShare to Pinterest
Labels: Everway, Into the Odd, Odd Everway

Today, we're celebrating the release of Chris McDowell's Into the Odd RPG, which is now for sale as part of Paolo Greco's Lost Pages imprint.

And we have a new inspiration for Everway.

The planes are as old as dirt, and the realm of Roundwander and its ur-metropolis of Everway lies at its center. A dirt-choked metropolis that has seen stars land and industries rise and fall, Everway is still the realm with the most gates between the spheres.

At least on paper, for only a few gates remain above ground.

Most are Lost Gates, buried far underground, deep beneath a City that has rebuilt itself numerous times, strata upon strata. Meet Ruff Crow, a warrior from one of Everway's Odd Families who trace their lineage back to the founders of the City.

One-eyed Ruff Crow stalks deep under City.  Donning his blood, muck, and chem-stained crowfeather mantle, Ruff takes parties below the City to recover lost things and people. He helps the truly desperate or foolhardy to find and access the Lost Gates.

You'll know he's near when you smell his cigar or see its fire.

Posted by Tallgeese at 12:50 PM No comments:

Email ThisBlogThis!Share to TwitterShare to FacebookShare to Pinterest
Labels: Everway, Into the Odd, Odd Everway

Sharper than a Kraken's Beak 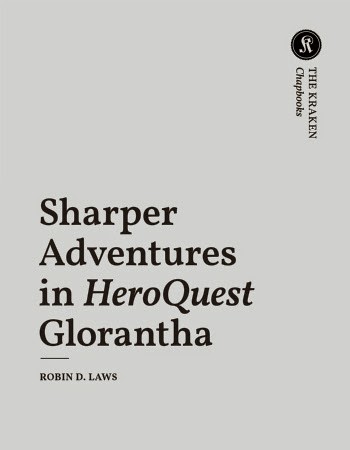 Maybe I'm late to the game, but I just noticed that Robin Laws' Sharper Adventures in HeroQuest Glorantha is now available from the Glorantha.com store as a PDF.
Posted by Tallgeese at 4:44 PM No comments: