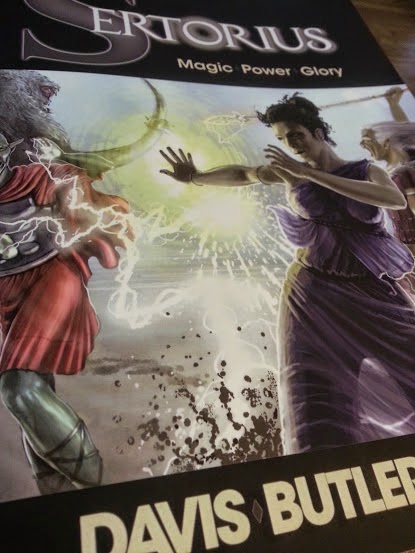 Thursday night I picked up a copy of Sertorius at our FLGS.  Sertorius is an East Asian flavored fantasy RPG that has rather unique interpretations of a number of standard fantasy races. You play powerful spellcasters whose godlike abilities draw followers, introducing (rather quickly I gather) the elements of domain level play. However, magical power can also be corrupting, and you can easily end up as a cursed feature of the landscape called a Grim.

These are very much my first impressions of Sertorius, but I think the result here is something like a cross between Exalted and the Adventurer Conqueror King System. The book is a brick with some 465 pages of content on character generation, spells, monsters, and the world before you get to the character sheets at the back of the book. It is a skills-based fantasy RPG system that uses d10 dice pools against a target number to determine outcomes.
Posted by Tallgeese at 11:56 AM