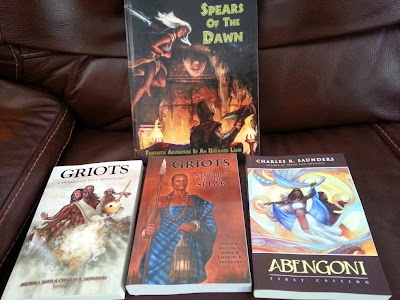 I first learned about Charles R. Saunders back in the 80s, when DAW published his first sword and sorcery novel, Imaro. Saunders is a U.S.-born African American journalist who has written a number of novels, as well as numerous essays and short stories. Today he lives in Canada.

Since the republication of Imaro several years ago by Night Shade Books, Saunders has helped give birth to a new genre, Sword & Soul, which takes what it needs from swords & sorcery, but is based in African and African American culture and themes.

Recently, I discovered that Charles Saunders had a new novel out, Abengoni (2014). I asked one of our two local SF&F stores to order a copy for me. Their buyer noticed a few related titles and ordered those as well for the store's new shelf: the anthologies Griots: A Sword and Soul Anthology (2011), edited by Milton J. Davis and Charles R. Saunders, and Griots: Sisters of the Spear (2013) by the same editorial pair.

Fans of RPGs like Nyambe and Spears of the Dawn will want to check these out.
Posted by Tallgeese at 11:11 AM

Email ThisBlogThis!Share to TwitterShare to FacebookShare to Pinterest
Labels: Emerald Savannah, Reviews, Spears of the Dawn